After a short break I finished Meadowhead this morning.

A couple of days ago I mixed up a dark reddish colour and rolled this over the bottom half of the lino plate.  I wiped some of the pigment away from the miner's coat area as I didn't want it to disappear entirely into the darkness.  This gave a more gentle feeling of something disappearing into shadow rather than a harsh linear delineation of the coat, which I didn't want. 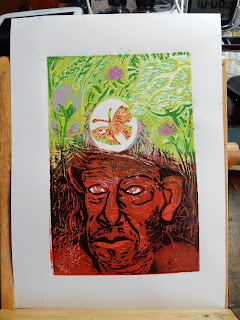 This morning I dabbed a little blue on the plate over the edges of the butterfly wings and then printed from this.  I used a small paintbrush to apply the ink to the plate. 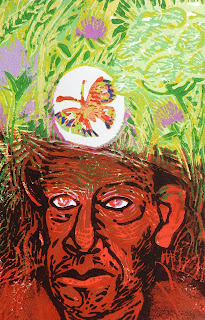 Then I cut away some of the miner's coat and cut into the roots and the darkness around him to give a feeling of depth and layering then brushed over a blue with extender added to it in the area around the miner's head and the remaining defining lines of his jacket.  I used a small square brush to apply blue onto the plate then printed from this.  I really didn't want to get any blue on the upper meadow area of the print as I wanted the contrast to be as great as possible between subterranean darkness and brilliant sunny summer meadow. 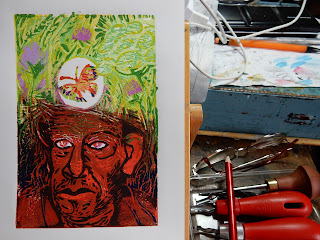 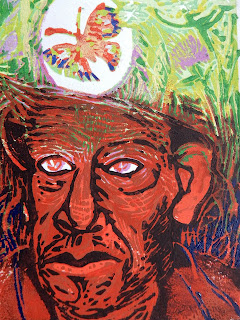 I had quite a bit of the blue left when I had finished, so I added a little red and white to produce a kind of subtle grey.  I printed 2 prints from what remained of my linoplate from this.  Cut into it a little more to leave just the most basic of lines, and rollered a darker version of this pale grey pigment over the bottom half of the plate to produce this monochrome image.

When it is dry I will do 'something' else to it, not sure what yet, to give it some kind of completion.  I think it will make a nice complementary pair to my main edition of 10 prints of the miner emerging into, or thinking about, his wildflower meadow. 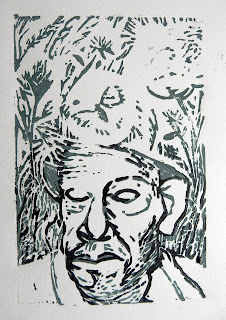