Black and white to colour 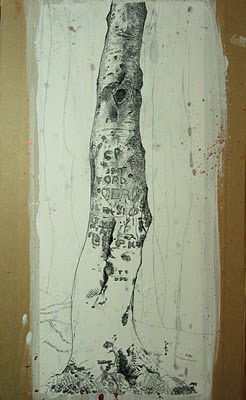 More progress on my new drawing, which I think I'm going to call 1947 Ford.

I'm playing around with a colour version too, this is the start of it.

My working title is 'long golden'.

I've been trying out ideas for colour work in my sketchbooks, I've an idea of calling this one Golden Stretch, or something like that. The foreground tree has the presence of a figure for me, which is something that happens quite a lot with my tree drawings. 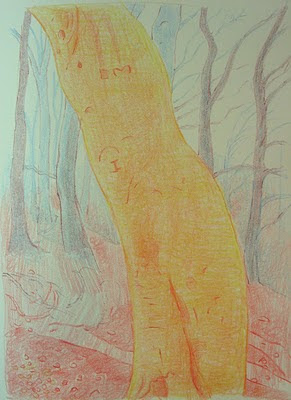 Both of the colour works are pure colour pencil, using Coloursoft and the wonderful Luminance.
Posted by Kay at Thursday, October 28, 2010 No comments:

Yesterday was bookended between 2 visits to the opticians, an early morning contact len check and a late afternoon eye test. My contact lenses have been blurry for some time, and now it turns out that the slight astigmatism in my right eye needs correcting. Also to help bring the close vision into focus my optician weakened my prescription so the distances are no longer crystal clear, but I stand a better chance of reading my own palm in dim light. Oh yes, and it turns out I'm also allergic to my new contact lens fluid. For the past few months my palms have resembled lunar landscapes all crusty and cracked. Hopefully have all that sorted soon. 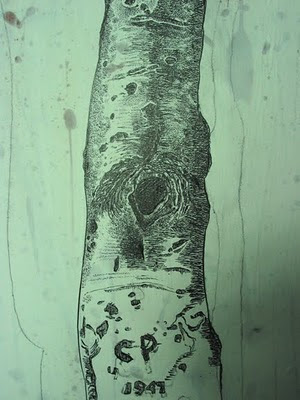 I had a real shock today when I went to buy some of my favourite perfume. Smell really locks into emotion for me, especially the emotion of memory. There was a programme on Radio 4 about this recently, how even smells you can't name connect with memories, mostly childhood memories, so they reckon. But I feel that I'm constantly laying down these memory recall points, kind of like the way your PC makes reference points to roll back to if you have a problem. Givernchy's Very Irrisistable (a present from Mum a few years ago) gives me a good wintry feeling, luxurious and cool. I didn't realise it was so expensive though! Nearly £30 a squirt! Think I'll have to wait for Christmas again to access all those happy feelings. 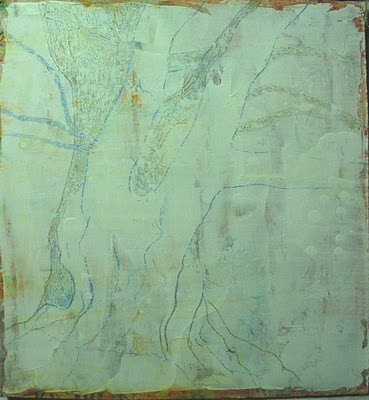 Blue trees just feel so right to me at the moment. I've got to find a way of making a presentable image of one. I'm enjoying experimentnig with textured grounds, layering colour and texture (mainly gesso and white gouache) on top of each other. I'm not certain how to bring it all to fuition though. 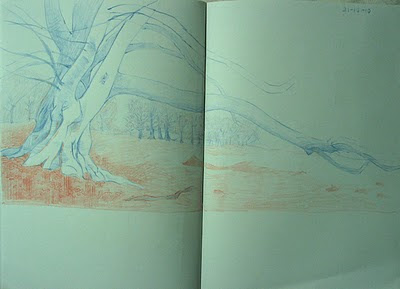 For which I apologise. I will attempt to do better in future. 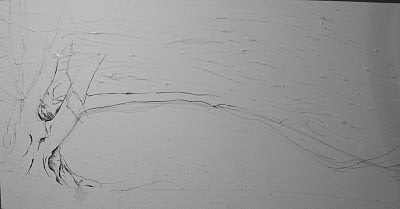 I slashed the watercolour paper with white gouache before begining my drawing and splattered the paper with diluted gouache. I'm torn between making this a black and white or a colour composition, I've made preliminary sketches for both. 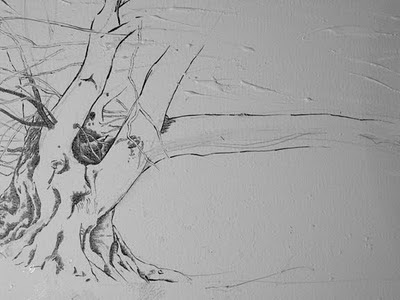 I've also begun another long drawing, another graffiti tree. This one's from a photograph I took earlier this year at Clent. The trees have quite a confrontational, soldierly look, the foreground tree wearing its graffiti like battle scars.

I slashed the paper with gold acrylic then dragged gesso over it. I'm interested in ways of making texture at the moment, though as I mixed acrylic with the gesso it doesn't make a particularly nice ground for the pen and ink to work on.
Posted by Kay at Tuesday, October 19, 2010 No comments:

I don't know why, but despite the glories of autumn I'm drawn to turning the usual world of colour upside down at the moment, blue trees for instance... 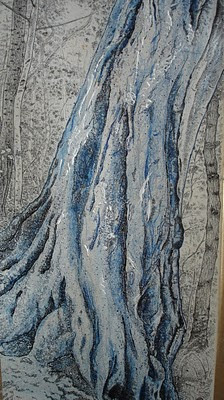 ...unstable trees especially, trees that are teetering, or appearing to teeter, drunkenly off the edge of the picture...maybe the tree has become a substitute figure for me, a human figure that is. And walking through a wood is like entering a fairytale world in which everyone has become instantly inanimate. 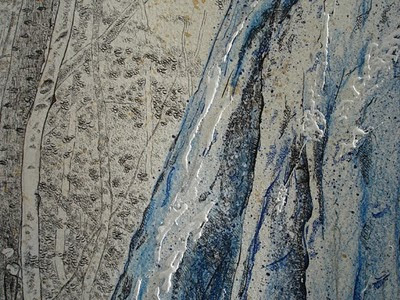 Of course woods aren't inanimate places at all, they are places of sometimes ravishing, often subtle beauty, noisy and quiet at the same time. Today G and I have visited Benthall Edge Woods, near Ironbridge. Country Living listed them amongst their roll call of idyllic autumn woods recently. They were truly magical and, luckily for us, G and I had them almost entirely to ourselves. 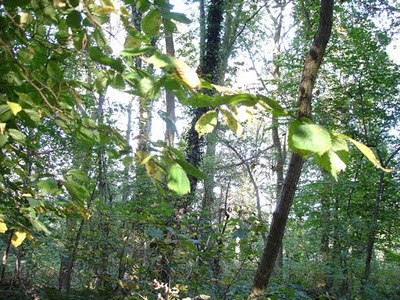 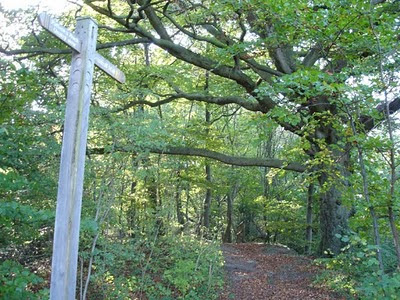 I love standing beneath a canopy of trees this time of year and just listening to the leaves and seeds dropping to earth, a bird's wing fluttering, or the crack of a twig as some unseen animal moves in the undergrowth. It's the very opposite of the kind of empty sensory overload you get in a town centre, this is sensory bliss, gradually as you stand there a whole world of sound, smells and sights come alive around you. You feel both insignificant and blessed. For me it's like being a child again. Both exciting and a comfort. 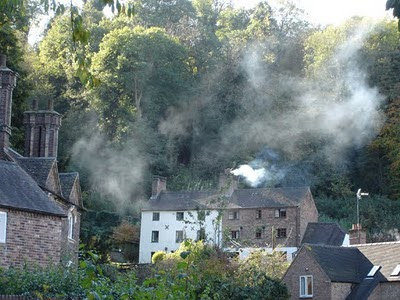 When I went to pick up the drawing I had included in August's Wolverhampton Open exhibition, Belinda, one of the organisers of the exhibition and one of the artists involved in The White Tree Studios, asked me if I would like to put some of my work in her 'little shop', an empty shop in Farmer's Fold, Wolverhampton. It's a real cornucopia of art with lots of styles and approaches on offer, though a little chaotic and bohemian looking at the moment. It's very much an artist's gallery, where as well as keeping shop when she can, Belinda is busy working on her own work.

Co-incidentally I just discovered that Belinda also exhibited at the Worcester 2010 Open at the Pitt Studio. Small world.
Posted by Kay at Monday, October 11, 2010 No comments:

The drawing board I'm using for my blue tree is actually the top of an old coffee table that collapsed a few weeks ago. It's very heavy, and the rounded corners aren't practical (it wouldn't sit still for me when I photographed it, hence the wobble in focus) but as I'm short of boards for new pieces I'm not complaining. 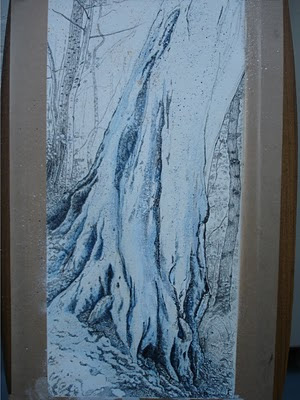 I would really like to begin several pieces and work on them side by side, but I've not got the space to do this. In fact, for such a huge place this world seems to offer less and less space in which to manouvre, I've lost so many pen nibs lately by sweeping them onto the carpet. They bounce and come up with crooked Concord noses. Which is annoying as these fine pen nibs are really difficult to come by.

On Saturday G and I went to Westonbirt, a wonderful place this time of year. Autumn is an annual 'event' and you're rarely alone with the trees, except if, like us, you linger 'til the very end (well as near to it as light allows). There was a lovely moment beneath a canopy of softly yellowing leaves listening to the pine needles and seeds dropping into the mulch around our feet. We were being watched of course, by an absent minded squirrel. Wonder if he'll remember where he's hidden his treasure?

I came back with treasure of my own, including this curious seed case, which was bright red when I found it on the ground. I think it came from a magnolia tree, which was aflame with these peculiar things, held upright like candles which gradually split apart to allow hard orange berries to peer through, like so many alien eyes. 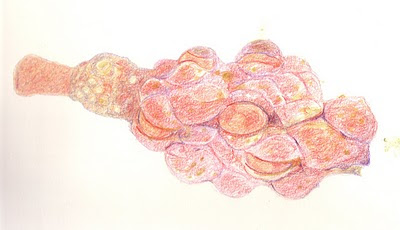 I don't know why but my blue tree seems quite edible to me. Maybe it's because the white speckles make me think of icing sugar... 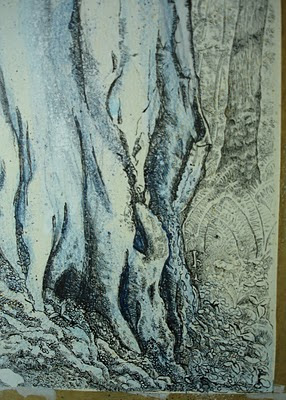 ...yes, if I could eat this picture it would taste very sweet and have a crisp, slightly greasy surface, dusted with icing sugar like an expensive French pastry.

I've been playing around with ideas for more colour work... 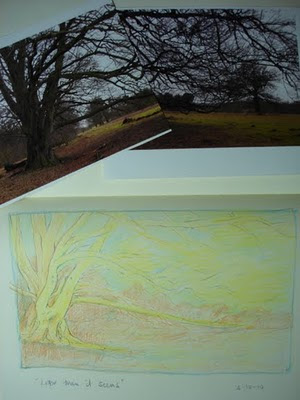 My use of colour here is purely instinctive, maybe a little emotional. But there's nothing intellectual about it at all. 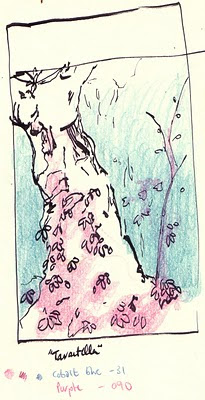 Here's another attempt at using colour with my pen and ink work. I think it's coming on better than my last attempt, which I'm considering filing in little pieces in the recycle bin. 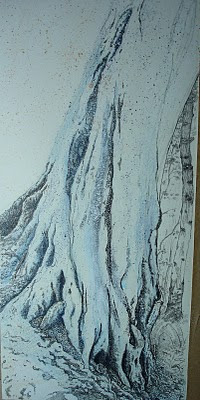 I don't know why but I'm compelled to make blue trees at the moment. Almost ice trees. Well I do know, or at least I analysed my own impulse - I think it's to do with wanting to thaw this creative hiatus I'm stranded in at the moment. The will is still there, but there's so much interference - both my own and external forces. 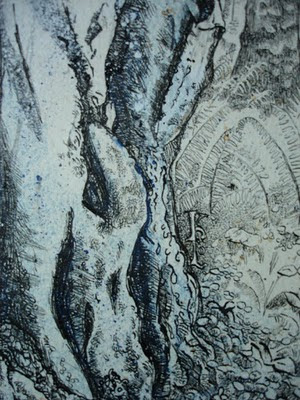 Or the blue tree is like a rare vein, like those in an Elizabethan portrait, a rare blue vein of freedom. 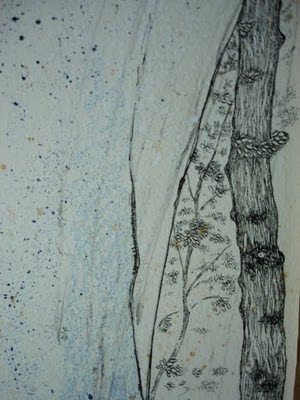 And here's something I picked up from a few weeks ago. A tangle of colour that I'm not too displeased with. 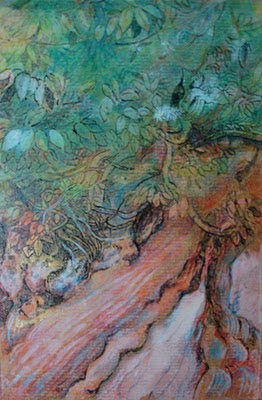