The weather is fooling us spring is here. But now the sun is setting, the birds are still singing, but it's getting chilly again. Nice while it lasted through.

I've been to collect my Blue Tree from Oakengates today, not such a long journey but as it was 2 trains, and the one to Shrewsbury runs only one an hour, it was a sizeable chunk out of my day. At my local station I was bemused to see a notice declaring 2 service cancellations due to 'no crew' being available. Cutbacks everywhere.

I've managed to creep forward a little more on my new piece, which I'm calling Listen. 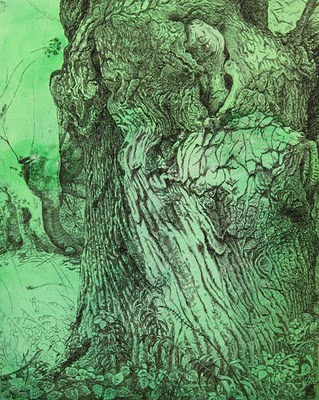 I'm aware of this becoming a claustrophobic drawing, partly because of the green, which can be a smothering and claustrophobic colour (except when it's in nature, of course), as well as because of the detail. I've become very involved in the distant tree (as I so often do, backgrounds draw me into them, perhaps because I am one of nature's wallflowers). I do have a plan though, more of which later. 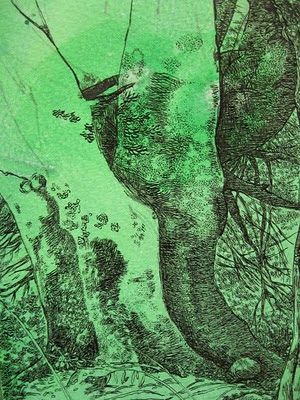 It's funny to watch the littlest birds work so industriously worrying the seeds out of their mesh dispenser, and the fat, cumbersome, apparently lazy wood pigeons flutter down to grub around in the long grass for the seeds and suet pellets they drop. The pigeons are clever, letting the little birds do all the work so that they can reap the benefits. Not so different to some humans.

I'm so glad the UK government have shelved their plans to sell off Forestry Commission land. I'd like to think it's because they were moved by the mass of public protest, but the cynic in me says they probably just realised that all the trouble they'd have to go to selling the land wasn't worth the meagre funds they'd raise. 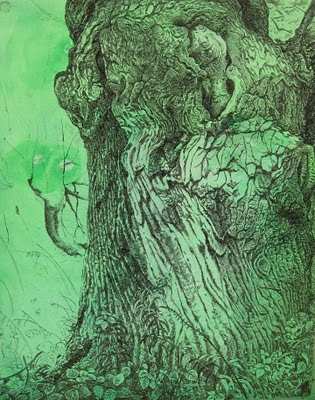 Work is progressing excruciatingly slowly on my green picture. I've done quite a lot of splodging too, much harder to disguise on a green base. I've tried to treat it as David Cox might have done, by elaborating on the splodges and trying to work them to my advantage, but it doesn't always work. Sometimes a splodge is destined to remain just a splodge.

This week, I've been continuing to enjoy Mozart and his letters. Also Never Let Me Go, a beautiful and unsentimental film who's message surpasses the plot. We're all donors and we all complete. That's what I'm taking from it. 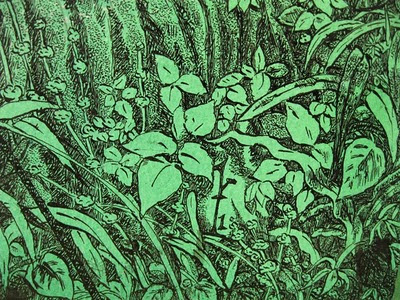 The birds have just stopped singing. A car engine starts up, its drone monotonous and bold.

More progress on my green drawing, which I've decided to call 'Listen'. Actually the title came pretty much with the begining of this piece.

I've pretty much wrecked the photographs I'm working from but the cost of Tri-colour cartridges for my inkjet printer are so pricey I'm loathe to print again. So I'm squinting round the ink blots and attempting to exercise my imagination, memory, and whatever else mysterious processes are at work to finish this piece.

Which I hope to do soon. The less time I have, the less patience too.

I wish I could work on more than one piece at simultaneously but time, space and temperament won't let me, at least at present. 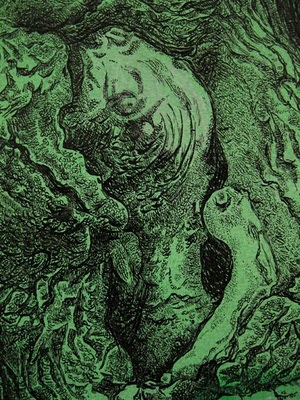 I've been reading Mozart's letters. Anyone who loves Mozart should read this book. He's my obsession at the moment. His music is one of the few glimmers of light in my life right now. It inspires, moves, comforts and energises me. The very best of medicine.
Posted by Kay at Thursday, February 10, 2011 No comments: