A Timely Piece of My Shadow

I haven't worked much on my artwork over the past week or so, partly because I've had a bit of a cleaning frenzy and have been doing some much needed chucking out of stuff I should have got rid of years ago, but hadn't had the heart to.  It's hard getting rid of old things sometimes, and it's amazing how the most mundane belongings can take on sentimental value.  I have been in the habit of scanning things like receipts, tickets, programmes and greetings cards for years now so I still have a digitised version of them to look back on when I feel like wallowing in the past.  Which do have a habit of doing from time to time.  I've always been both astonished and fascinated by the feeling of time passing, the surreality of memory and how something can feel so tangible in the mind and yet be irretrievable in reality.

I returned on Monday from a lovely Easter break with G to Cornwall.  We paid return visits to Heligan and Eden, and visited a garden which was new to us called Pinetum Park, which has some lovely exotic pine trees and a beautiful Japanese garden, among other features.  I took a few photographs which I hope might be useful to my work in future.  We paid a return visit to Mevagissey (or Meva as I've heard the locals call it) where we stayed in 2004.  Back then we had a lovely meal in a restaurant called The Haven, and we stayed at a lovely apartment called The Sundeck, all gone now.  Yet still there and tangible in the memory.  If I close my eyes I can seat myself back in that tiny cosy restaurant turn my head and see the businessmen enjoying their rowdy dinner to our left on the other side of the chimney breast, to the right the apologetic waitress (or maybe owner) apologises that our food is taking so long, only it is all locally sourced and the table is ours for the night.  The meal was lovely, well worth waiting for.

Anyway, here is A Tiny Piece of My Shadow. 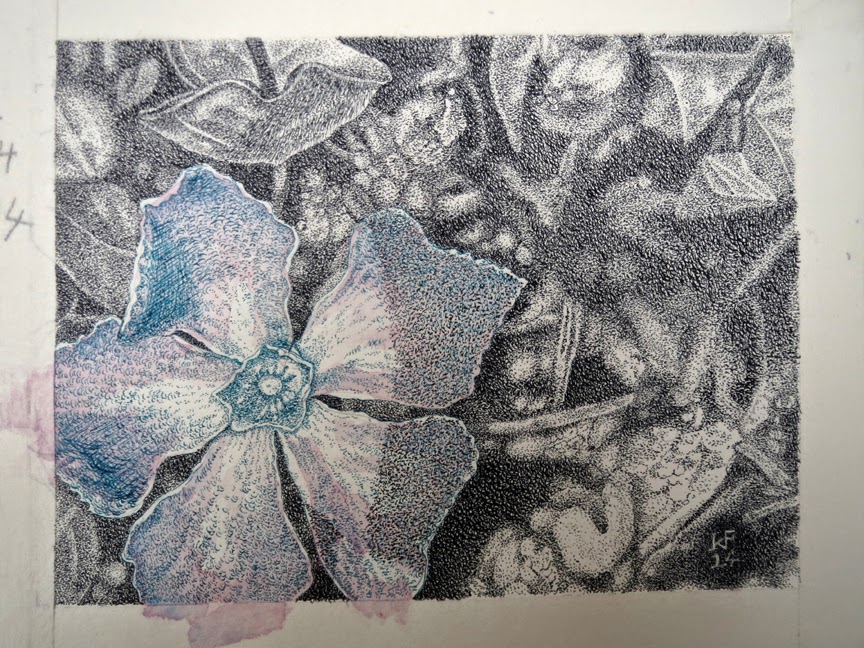 And here is something new which I sketched out this evening.  Another magnolia. 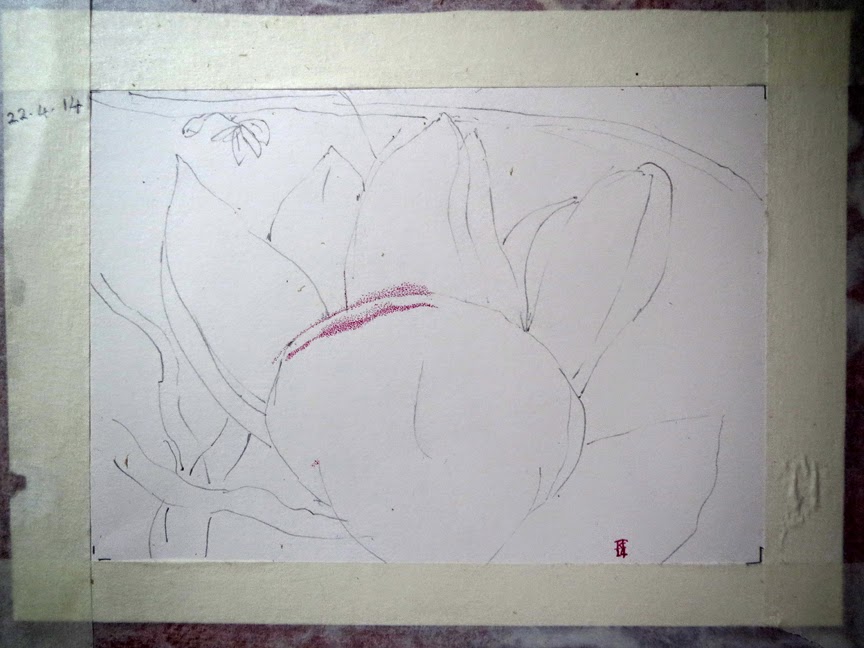 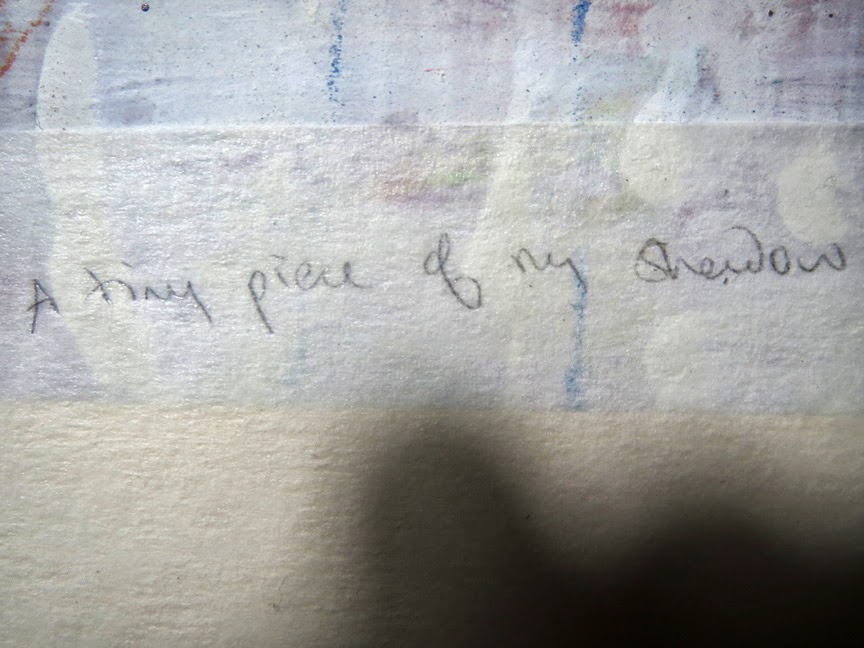 ...which is the piece I began yesterday.  It's smaller than Blue Tulip, about A5 or so, which is very small for my recent work.  There are several reasons for this, not least being time and energy constraints.  Also, as I'm making this piece for another self-imposed deadline, I'm aiming to complete it within a week if possible.  I'm not going to rush the piece, but I'm making an extra huge effort to make every effort mean more, if you know what I mean.

About 12 or so years ago I began making a series of photographs of flowers and plants which I called 'Fuzzy flowers'.  It was really then when I started using a digital camera with any seriousness.  They're snapshots in a way, and I thought then that they combined the insignificant and transitory with the poetry of the fleeting, the poignant moment.  They were fuzzy and out of focus, but I liked the quirkiness of the apparent throw away nature of these photographs, which was something that I would never have dared to do if it wasn't for the digital camera.  I would never have had the money to take all those 'throw away' photographs and have them printed out on paper, and so I was free to indulge in recording my fuzzy, poignant, transient moments.

This new drawing is taken from a later incarnation of those fuzzy flowers.  Here's day 2 of work in progress... 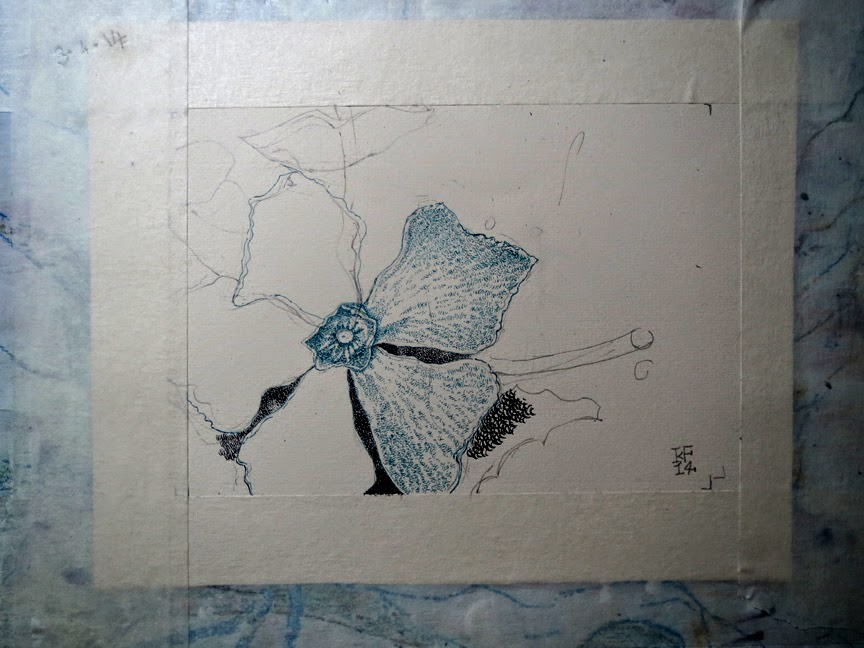 It so happened that I had problems with my printer yesterday, which insisted on spitting out, or refusing to swallow, any of the lovely shiny HP Premium Plus Photo Paper I'd bought.  Turns out 300g is too thick for its little printer mouth.  Then the printer got its revenge on me for trying to feed it over-thick paper by promptly running out of Tri Colour ink!  So I improvised, and began making this drawing straight from my tablet screen.

After an awkward start I began to forget I was looking at a computer image (which does feel distinctly different to drawing from to a printed photograph) and I managed to make some progress. 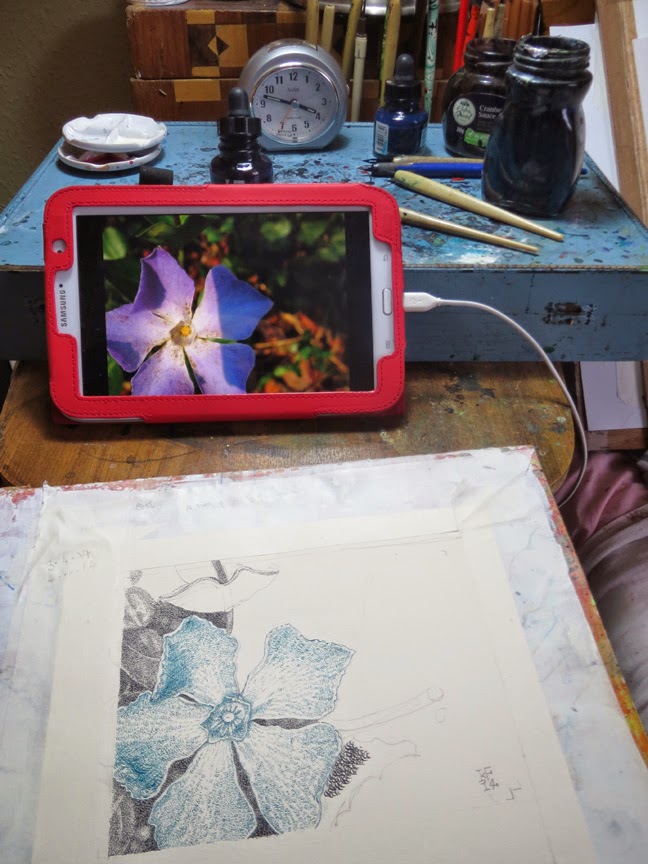 Mom got me first thing this morning with an April fool 'there's a spider on the wall!'  Works every time.

But at least I've finished this little picture at last. 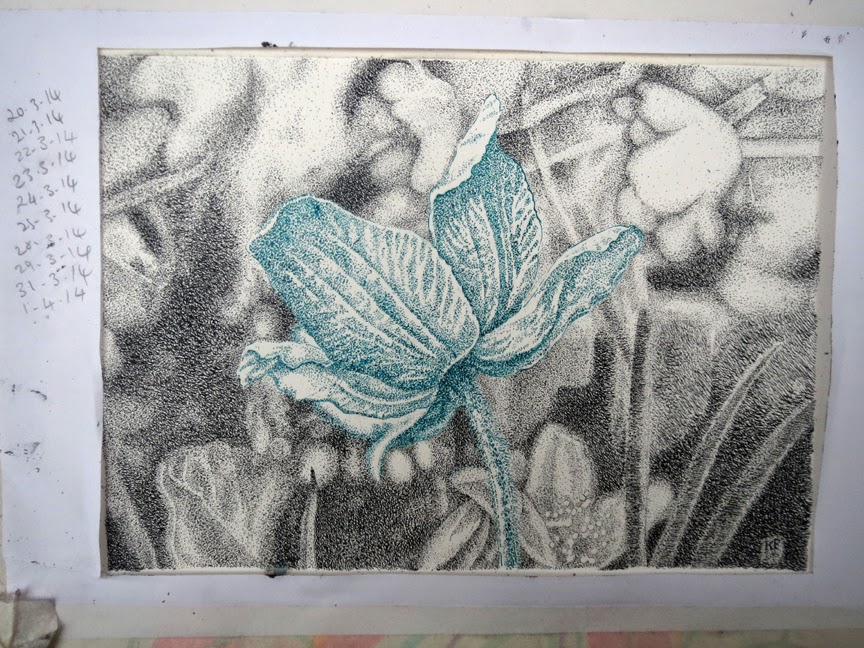 I'm really obsessing over the background in this drawing, and it's something I've an idea to take further in my next piece which hopefully I'll start later this week once I've got a couple of handing in deadlines out of the way.

Digital submission seems to be the popular way to enter opens lately.  Even the RBSA has gone digital for its Prize Exhibition.  I'm not feeling very confident though, as I don't think my work really comes across in digital images.  Maybe it's my amateur approach to photographing them, but I'm afraid the ssubtelties of my style will dissolve on a computer screen or worse, when projected many sizes bigger onto a wall or screen.

But there's no avoiding it if this is the way open submissions are going these days.  And at least it saves in unwanted trips to hand in then collect rejections a week later. 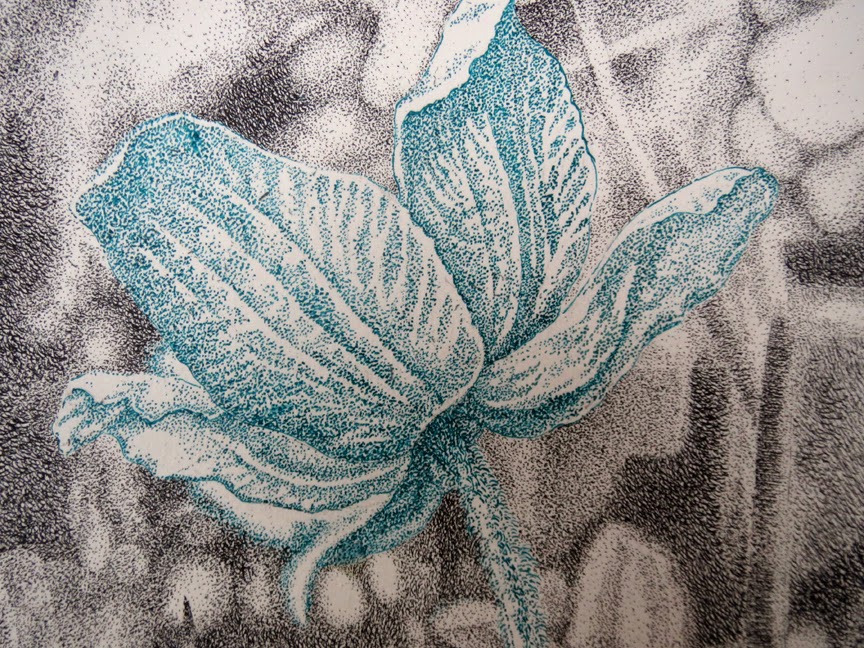