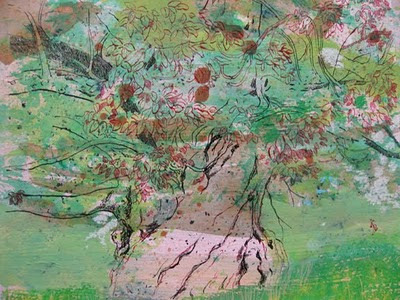 Painful progress on my tree picture. The colourful textures are so far comprised of splats (gold ink) and rubs (paint on Clingfilm). There's also some oil pastel (lower part of the picture). I'm thinking of tracing the whole thing again next, to find some solidity in the form, then maybe trying some kind of printing over what I've already done. Not sure yet.

I bought a pot of seeds from a pound store a few weeks ago. I sewed them and now I have seedlings. Wild Rocket. Every day I turn them away from the light and by evening they've found it again. I love that I share this same craving for sunshine. Makes me feel both at one with vegetable life and also, eerily insubstantial. I'd like to draw them leaning towards the light, one seedling tumbling over another in an attempt to soak up the most sunshine, just like people at a sale or struggling to be first on the train. So what I'm growing here, I suppose, isn't a pot of salad at all but a rat race in miniature! 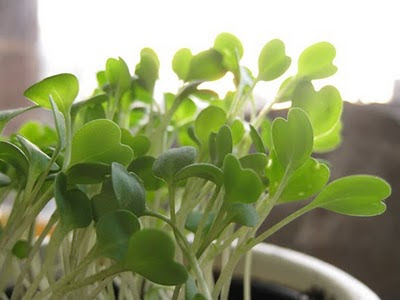 How will I have the heart to put them on my sandwich now!

One thing about getting older is that I'm starting to think of my life as a story with flashbacks that occur in the text (totally randomly and for no reason) which tease the main narrative with hints at some meaning and subtlety that the protagonist mostly fails to understand.

I've always been self-conscious but this super-sense of myself riding the great whirling belt of life (holding all these explosive memories in my brain) is a new development. One day I imagine there will be more flashback than forward motion and the theatre of memory will become intertwined with the arena of the imagination. Maybe that won't be so bad afterall. 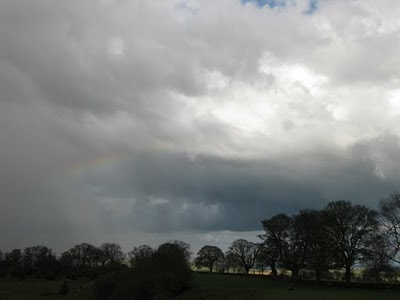 A lovely rainbow I photographed yesterday running through a hailstorm with G on Dover's Hill. It was truly wonderful watching the advancing clouds and the light transformed into something glorious. It didn't matter that I got half soaked at the end of it. Didn't find my pot of gold though.
Posted by Kay at Monday, April 26, 2010 No comments:

All the birds of Oxfordshire and Gloucestershire

I had a disappointing rejection this morning which has shaken my confidence somewhat. Especially since a couple of days ago I had a wonderful surprise, I received an e-mail to say that Golden River had sold at the West Midlands Open. Amazing how one bit of bad news can so easily cancel out the good. Now I'm struggling to maintain my self-confidence, and struggling to remain optimistic about my life and my art.

I've started a new drawing but with the rejection coming hard on the heels of my failed drawing, I'm feeling pretty hopeless really. I knew working full time would take its toll on my creative work but it's hard to accept the reality of my situation. Time is as much an ingredient as inspiration, perspiration, paint, paper or ink. And I just don't have enough of it at the moment.

Ideas still swim in my head, but I feel like drowning them again. The Ivy drawing on this page has no soul, I'm making it with a deadline in mind, but don't have much faith in it because the passion and the belief are not there. I have a romantic idea of making a new drawing based on 3 photographs I took last year at Walberswick nature reserve. I was looking through my photographs the other night and they immediately made me think of 'and all the birds of Oxfordshire and Gloucestershire'. I don't know why I love that poem so much, its still heat and its sense of suspended reality, as if the narrator stands before a precipice or that still moment beyond which, something pivotal is about to happen. Perhaps it's that. 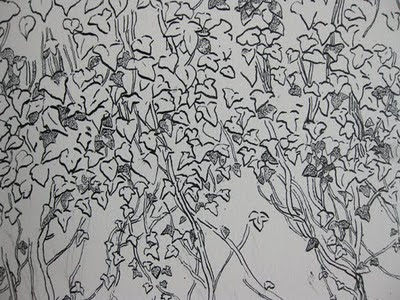 Although I really want to work on my art this evening I find I can't.

Here's progress on my most recent piece. I'm not so pleased with it. I began it differently to my usual method, and though I quite like the effect in some areas, I'm not convinced by the whole. Last night I added some more colour to the tree in the hope of finding some definition, but my enthusiasm for this piece is dying on me. 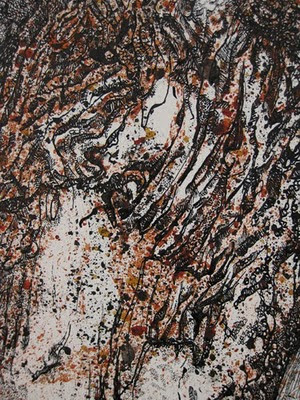 Here's a new piece, or rather an old piece I began last year. Actually, it began as the gounding for a seascape, but I've diverted it, via Sidcup. 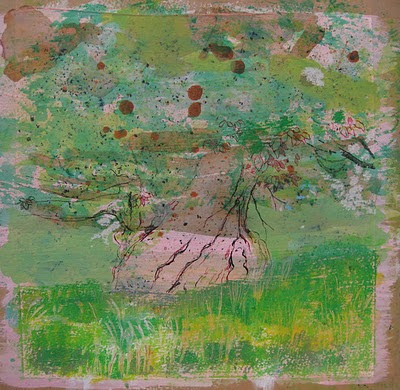 I've had some new specs today, so now I can see for mile and miles. But creeping Presbyopia keeps the detail at bay. Unless I take off my specs and look at life with frameless, uncorrected grey tinged reality.
Posted by Kay at Tuesday, April 20, 2010 1 comment:

Yesterday was another lovely day today, though I missed most of it being at work at the library.

After tea (or dinner, the main evening meal) I rushed into the garden and garnered the dregs of my energy to make these 2 quick sketches. About an hour and half's work I managed (listening to The News Quiz, The Archers and Front Row) before I began to get cold and tiredness caught up with me. 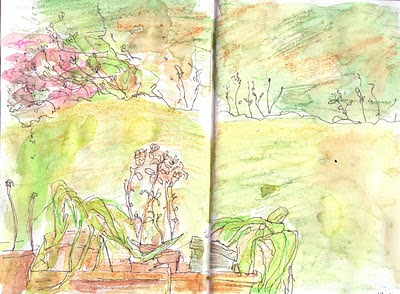 Mom's always buying plants then, when a few weeks (days sometimes) later they start to wilt they get transported outside. These are the remains of a hyacinth (actually I bought that one for Mum) and a rose. The third (on the right) are my 'tete-a-tete' daffs, which I will eventually get round to planting in the garden for next year. Whenever I hear the phrase 'tete-a-tete' I always think of Jane Austen. I can't remember which novel it was (it may have been Pride and Prejudice) but it was definiely in an Austen novel that I first encountered this phrase, and it was a very long time ago! 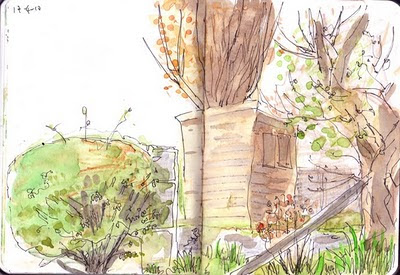 After those dead plants I made this quick sketch of the top of our garden (I was a day ahead of myself when I dated it you see). The sun was setting and catching the edges of the new leaves coming on our old apple tree (on the right) and the dead leaves still clinging to the branches of our poplar tree (middle). Everything's starting to come into bloom now and it makes me happy to see it and sad too. Sad because of the losses of recent (and more distant) years, sad because of how time 'like an ever rolling stream' has played a trick on me. I've blinked and half my life has gone.

I had to Google the fragment by Isaac Watts by the way, I remember it from a Divine Comedy song, but my fragile memory lost more than it remembered.
Posted by Kay at Saturday, April 17, 2010 No comments:

Oak tree without a name... 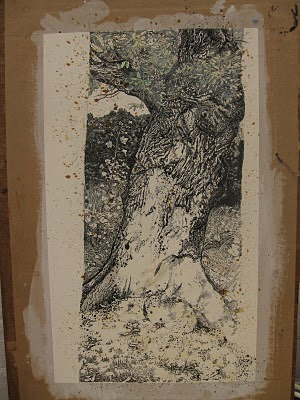 This is as far as I've got with my new drawing... 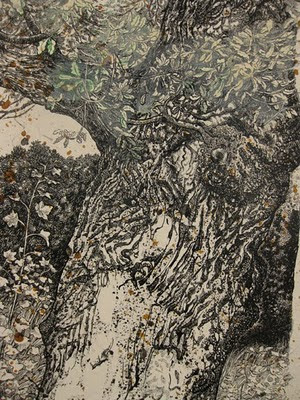 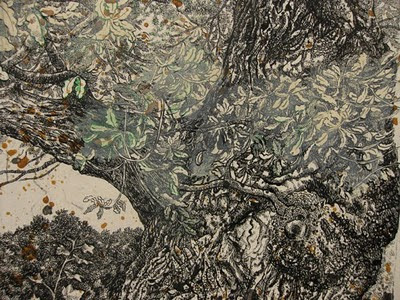 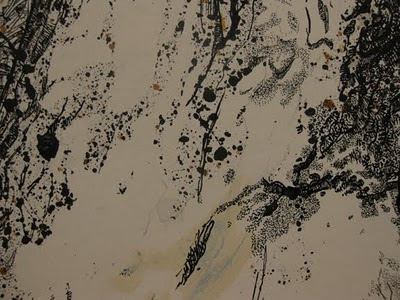 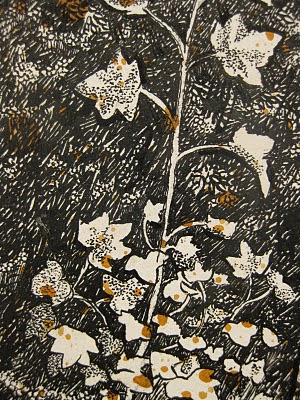 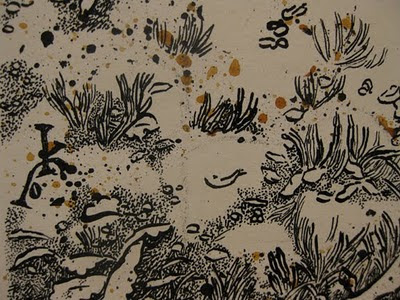 The shadow of our house on next door's house 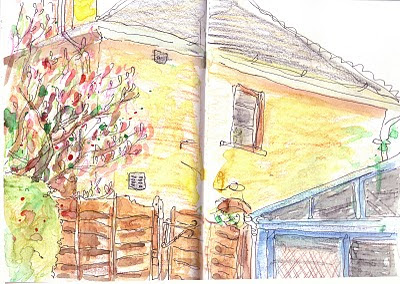 Earlier this week I took advantage of the lovely spring sunshine (though I wrapped up in coat and scarf as I'm still feeling the cold) to make these quick sketches in our back garden.

I began wanting to draw our nextdoor neighbour's magnolia tree, and our old nicely weathered garden fence, but when I noticed how the sun threw the shadow of our house onto our neighbour's side wall, I became fascinated by that. 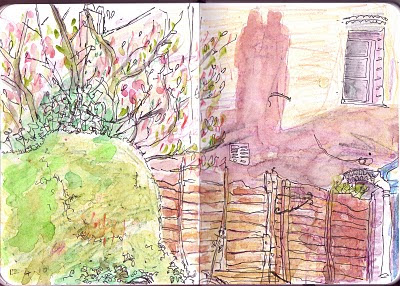 Our neighbour lends us a glimpse of their magnolia tree and we repay them with the shadow of our house. Sounds like a fair swap.
Posted by Kay at Wednesday, April 14, 2010 2 comments:

The past few weeks

As time's been short lately for my creative work, I began this piece in a different way to usual. I thought I'd try giving a quick blast of texture then working into it, partly because the sight of a white expanse of untouched paper was a bit dispiriting. Partly because I just fancied trying something new(ish).

So I began with my photo, in this case a collage of a couple of photographs I printed out using my Inkjet printer, then taped together. I made a few sketches of this photograph collage, and added in something I took from another of my photographs to give me my composition. 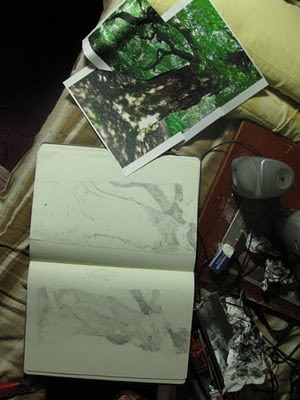 I was mainly interested in the texture and the shadow play in this photograph. The shadows of the leaves staining the gnarly bark of the tree was what attracted me when I took the photograph, so the play of projected leaves and light on the bark was going to be the focus of this piece.

When I'd worked out my composition I made my initial drawing on paper which I'd stretched and given an undercoat of gesso and white gouache. 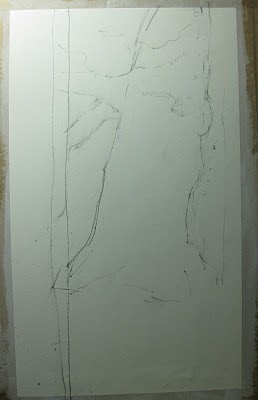 Then I quickly painted in the areas I planned to leave white, or the highlights to contrast with the shadows. I did this by painting these areas with masking fluid. 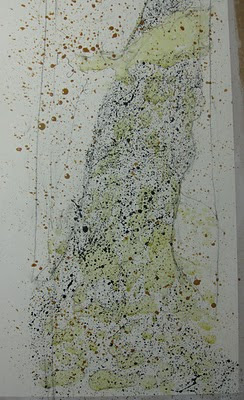 Then I splattered my drawing with a mixture of black acrylic and yellow ochre watercolour. I like the stubbly rough texture of the gesso and the black acrylic, which gave the scary white paper some quick textural animation.

I helped the drying process of the paint with a hairdryer, then when it was dry I used my hands and an eraser to rub off the yellow rubbery masking fluid... 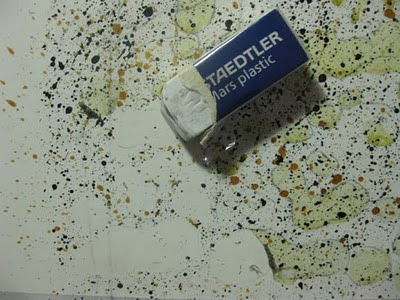 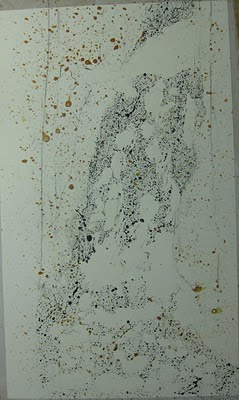 Then I began working from my 2 photographs (foreground and background basically) in pen and ink.

And this is as far as I've got so far. 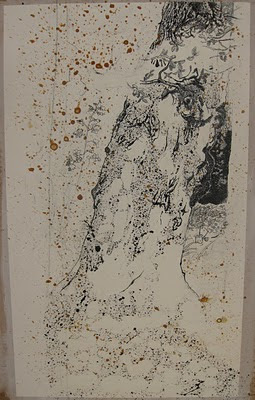 Over the garden fence...

I've been so busy working 2 part-time jobs that I've had to discipline myself to conserve my energy for what's important creatively. I'll make a post about my main work in progress later (hopefully). In the mean time, the weather was so lovely today, and I was frankly quite down about missing it, that as soon as I got home from work this evening I bolted down my tea then rushed into the garden where I made a couple of quick sketches.

I really wanted to try some colour for a change, so I made this first sketch of our old fence and the neighbour's flourshing Magnolia tree. I started with a quick pen sketch, then added some rough colour with Derwent's Aquatone pencils, turned them into a textural wash with a little water and finished off by adding some more vivid colour with my old Cotman watercolour sketch box. 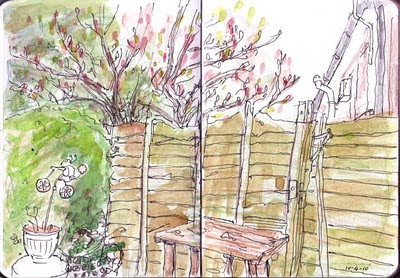 I've had these watercolours for years...donkey's years, as they say here in the Black Country (they may say it elsewhere too). I was going to throw them out a few years ago. I'm so glad I didn't now.

And then just enough energy left to make this quick line sketch of our fence and what can be glimpsed over the top of it. I might add a little colour later, I'm not sure yet. 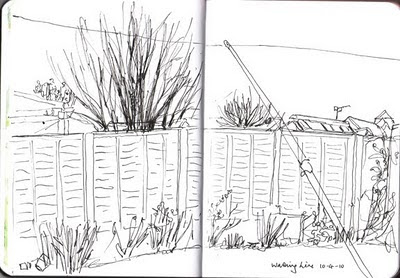 There's a name for bits of garden you benefit from 'over the garden fence' isn't there? I can't remember the term for it though.
Posted by Kay at Saturday, April 10, 2010 No comments: