Drawing to a close. 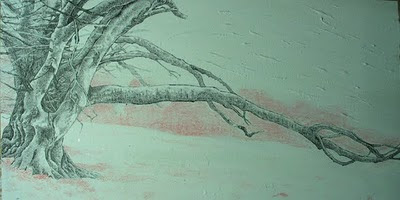 This has been really strange year for me, since starting a new job back in March I've been slowly paying off debts and struggling to remain creative. I think Blue Tree is the only thing I've done this year that I really feel pleased with, since starting working full time that is. I've certainly not achieved anything near the quality of PW PW 2001, which was the last thing I completed before starting working full-time.
I'm trying to finish off a few pieces at the moment. First, my most recent piece in progress, which I'm calling Long Winter for the time being.
Then 1947 Ford, which I'm not entirely pleased with. It started off well, but there are more things that I don't like about it than those I do. I've tried to diffuse the pink coloured pencil by adding a little yellow and splattering it with more white gouache. I do like the textural effects of gouache layered over pen and ink and gesso. The coloured pencil goes with this combination better than I had expected. 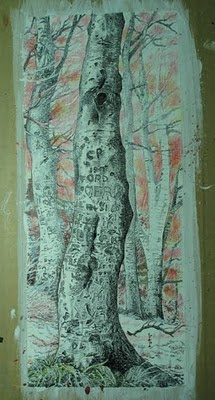 And here's something I dug out last week, it's a drawing of snowdrops which I abandoned earlier this year. I like the juxtaposition of ink and gouache and the softening effect of the Ingres paper it's worked on. Maybe I'll try and finish this too, but I don't know if I'll do it before New Year's Eve. 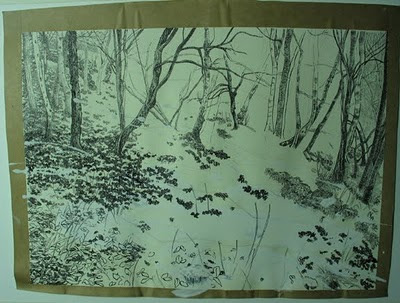