I've been taking a break from trees and have made a couple of quick self portraits. The first in charcoal and conte crayon on hardboard which I primed last summer and had been using to stretch paper on. When I cut the stretched paper off it this evening, I decided that I liked the surface, which I'd primed and stained slightly white. I stained it some more with white gouache tinted pink with a little acrylic ink, then began working on my drawing while the board was still damp.

I drew myself sitting in the growing dark in the glowing white light from the television behind me. 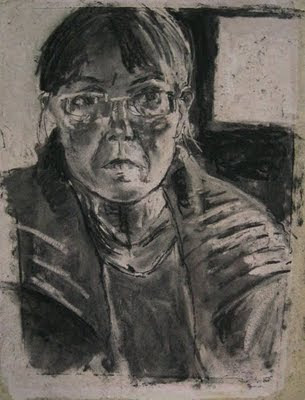 When I'd done as much as I can tonight on this I began a really quick drawing on Ingres paper in fibre pens (various sized nibs), dark was falling fast by then and I found my place on the paper as much by instinct as sight. I had to give up after 15 minutes or so. 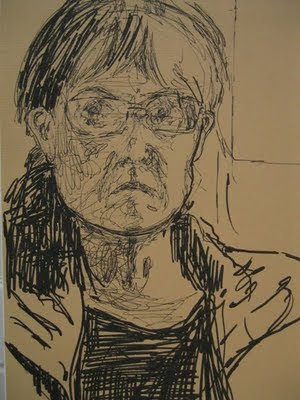 I really wasn't feeling half as severe or as fretful as I look in these drawings by the way.

I'm enjoying a book about Courbet at the moment. I really like his self-portraits, in which he looks the epitome of the 19th century Bohemian. I love Courbet's use of shadow, the dark and the black in his paintings enfolds the subject and draws in the viewer, it's an intimate and dramatic darkness that seems both provocative and inviting. I saw Buriel at Ornans in 2003 in Paris. What an astounding picture. No reproduction can convey the drama or the sheer size of the piece.
Posted by Kay at Thursday, May 26, 2011