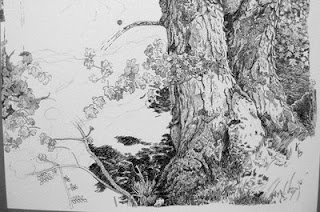 Well not strictly haiga inspired, but something I've been mulling over for a few years now, how to bring together the twin worlds of my visual and literary practice. Back in 1989 I self-published a small book of poetry called Blackberry Jam, accompanying my poems with my own illustrations, but since then my attempts have been sporadic. Back (why do I keep going back?) in about 2002 I posted work in progress of a drawing but wasn't really sure how to present the progress in a way that added anything to either the words or the image. I've been, for a long time, sporadic in my efforts, not that I'm not continually doing something but that the somethings are often disjointed, disconnected, I start things that fizzle out and I never finish them.
So maybe I'll not finish this new idea either (maybe not finishing is a good thing, as it means there might still be something left to achieve), this week has been one of those weeks where my head fizzes with ideas. This has it's good and its bad points, the bad being the resulting sense of confusion, and the exhaustion that follows. I have to pluck something out of the fizzle, and here goes.
My idea (actually not a new one for me, though I've never attempted to perfect it in any way) is to simply make an artwork out of the recorded stages of my progress. In this case, I'm starting on a drawing that's already underway, but while the iron's hot...
Below are both my work in progress and the image and words combined, I have yet to think of a word to describe this. I do have ideas about what I'm going to do with them however, more later.