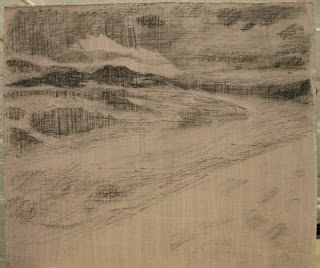 As well as continuing work with my pure coloured pencil drawing (see the two pictures below), I've begun another piece, which I intend to be in coloured pencil again. This time, I began by sanding down the smooth side of a piece of hardboard, then adding several layers of thin gesso mixed with white acrylic paint, sanding down once again between applications. Then, I gave the board another coat of gesso, this time with a pink tint. On this I began my drawing, in graphite pencil, the gesso has a nice tooth to work on with pencil, though it's difficult not to smudge work in progress by leaning on it. Rather than fixing the pencil drawing with fixative, I gave it another coat of this time clear gesso. This smudged the pencil a little, but I didn't mind that at all as my scene is a watery one, another beach scene. Now the pencil is fixed, I'm going to work on it again, maybe with coloured pencil, or perhaps some more graphite again. This is similar to the way I began my Silver Sands of Morar picture, though I hope this time to produce something a little more refined.

The pink gesso beach, by the way, is again taken from a photograph of the silver sands area of the western Scottish coast. The composition this time is quite abstract, with lots of space. An empty beach, my idea of heaven. 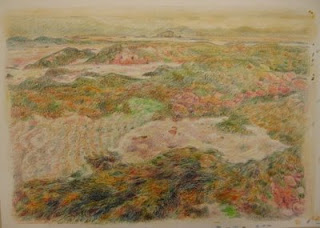 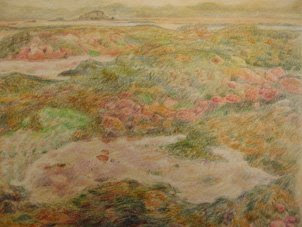 I've also been progressing with a pen and ink drawing I began a few weeks ago, it's another slightly abstract composition, smaller than my gigantic tree drawing of last month. Pen and ink, the way I work with it, is extremely time consuming, an aspect I both love and lose patience with. I love it though, because stippling, hatching and cross hatching, can be extremely relaxing procedures. Before the wrist and back ache sets in, that is!

I've done very little with the revision of my novel since last week, and despite my promise not to chase any more literary projects until I have completed this one, I've found myself tinkering with poem ideas, mainly haiku length, or one draft poems. I can't seem to write much these days however, thinking in words has got a bit frustrating and a bit painful for me. It's at times like these I'm glad that I'm 'Jack of all trades' after all.

But there are so many distractions lately, I’ve launched a Facebook page, something which I wasn’t really that keen on doing because I don’t really like the ‘closed’ network thing, it reminds me too much of playground cliques, but after finding a couple of messages waiting for me on my un-developed Facebook account, I decided to give it a go. I must say it’s a very slick and complex set-up, with so many ways of interacting with groups and other Facebook people (even if you aren’t their friends), there are so many poets on there too! I was very impressed, if not a little anxious and daunted once again by the ‘closed network’ aspect of things. Yet the widgets and the ways of bringing into Facebook other elements of your on-line existence are amazing, my main problem turned out to be how not to let myself get carried away with this highly addictive on-line environment. Hours of fun (and anxiety, if you’re like me). 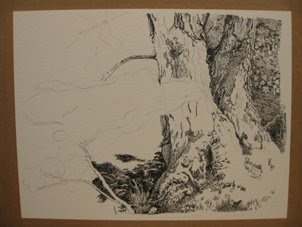