Although I've worked in Wolverhampton City Centre for 3 years now, I've never set foot inside the Light House Media Centre. Based in the striking Chubb buildings, about 5 minutes walk from the train station, the Lighthouse Centre houses two galleries specialising in photography exhibitions and a cinema showing both art house and mainstream films. There's also a cafe, which had a good write-up in the Express & Star last weekend as a quiet place to go for a lunchtime snack.

I got a bit lost finding my way in, there's no big flashy sign, no bright lights, just the immense bulk of the Chubb building which felt pretty eternal as I followed the huge red brick wall around in search of a main entrance. Eventually I tried a door and found myself in an airy, light courtyard. The information on offer was still pretty low key, and I felt quite adventurous and brave (by my own standards) definitely on unchartered ground. A few steps lead to an atrium area with the faint sounds of a café and a quiet bustle of activity. The receptionist was busy chatting so I snuck into the main gallery on the right to see a very moving exhibition of photographs of sufferers of Alzheimer’s and dementia, Accompanying Alzheimer’s: Loss, Love & Laughter by Cathy Greenblat. The exhibition area is spacious and well lit, a very nice space for any exhibition with plenty of room to walk about in. The photographs, which portray dementia suffers from India, Japan, the US and the UK, are tender and yet unflinching images of this aspect of life which often, we prefer to ignore. I did not find it easy looking at these photographs, but I respect and admire the photographer for bringing this aspect of millions of people's lives not only into an art gallery but literally the living daylight. It's easy to ignore that which frightens us, and to see these photographs does not make the fear go away, but perhaps it says that, for a lucky few, there are at least brave, kind and patient people, the carers who are portrayed in these photographs, who attempt to make the end of life that little bit more comfortable and dignified.

I saw in the leaflet that there was a second exhibition space, the Balcony Gallery, and when I asked at reception I was told that there had been a buffet on, and if I didn't mind the food lying around I was welcome to go upstairs to see the exhibition. The young guy behind the reception desk then very helpfully took me across the courtyard and unlocked the door so that I could go upstairs to see the exhibition! I felt like a VIP enjoying a private view. I was a little worried that I might not be able to get out again (I was on my lunch break from work...so this might not have been such a tragedy), but I needn't have worried. Like the Alzheimer’s exhibition, Timeslides, by Simon Cotterill, uses photography to explore the effect of the passing years, only this time, what could have been depressing images of memento mori turned out to be fascinating and for me at least, quite uplifting. The photographer had advertised for people to recreate photographs from their past, the only requisite being that there had to be at least 10 years between the 'then' and the 'now' photograph. Seeing the differences passing time makes on anyone is always fascinating (if sometimes sobering) but this exhibition is far from sombre. If anything, I found it quite inspiring, especially as you have to chance to read the biographical notes in a folder kept in the gallery. From reading these notes, the resilience of human nature was what struck me the most.

I'd love to go back to the Light House Media Centre again, maybe to see a film or have a snack in the cafe. Wednesdays feature a cut-price matinee, £3.00 plus a complementary drink. It seems like a really nice place to escape to from the noise, the construction work and the crowds of Wolverhampton City centre. I just wish my lunch breaks were a bit longer. 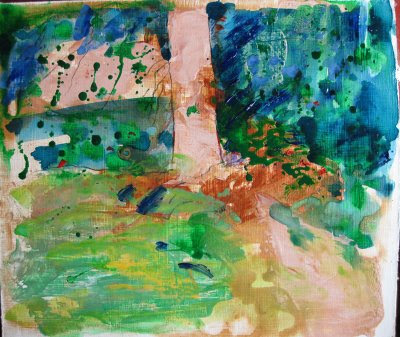