I had a nice morning at the RBSA on Thursday where the UK Coloured Pencil Society are holding their annual exhibition. Although I've visited the Society's website often (and have been astounded at the quality of the work being done in this medium) I've not really seen much coloured pencil work in the flesh before. I have been in love with pencils as actual objects for the past 5 or so years, ever since I bought a box of Signature Watercolour pencils from Heaton Cooper whilst on holiday in the Lake District. My attempts at creating work with them has, however, been somewhat disappointing. My colour work tends to disappoint me, I end up with something, but it's never usually what I would have liked. This, of course, is not such a rare thing (either with literature or the visual arts) and sometimes ending up somewhere completely unsuspected at the end of several hours, days, weeks even of effort can be quite exciting, but my final destinations have tended to be disappointing places.
There was some lovely work on show at the RBSA, experimental work such as Malcom Cudmore's large scale works on board and gesso and a breathtaking portrait by Julie Douglas of the artist's son, I'd never have guessed that this work was in coloured pencil, immaculate and flawless this beautiful large scale portrait seemed had the luminous quality of a watercolour. I loved the immaculate, static sill lives by Peter Woof and the vivid and densly executed coloured pencil paintings by Irina Garmashova-Cawton. Visiters to the exhibition are asked to vote for their favourite piece, and my vote went to Kate Clarke's Old Timer's, One, Two, Free! A virtuoso tryptic portrait of the artist's elderly mother which explores her struggle with Alzheimers Disease. The text that dances and eventually disinstegrates in the sitter's hair perfectly expresses the fragmented thought processes of someone with dementia.
I also loved the beautiful dark and moody coloured pencil paintings by Neil Houghton, immaculately executed in the creamiest and most opaque of pigment, 'Driver of the Great Marquees' is a very fine portrait, and again you would probably not immediately guess that this piece was excecuted in coloured pencil.
Nice touches at the exhibition were copies of the Coloured Pencil Society magazine to browse through, and the opportunity to win works of art by leading exponents of the coloured pencil medium. My favourite was the lushly textural painting by Vera Curnow, founder of the Coloured Pencil Society of America.
It's a shame that there wasn't an illustrated programme to go with this exhibition, I'd have liked a reminder of the work on display here. Instead I'll have to make do with the on-line exhibition here, which features all of the work on display at the gallery.
I had a quick look at the other exhibitions at the RBSA while I was there, on the first floor is A Window On Iran, an exhibition of paintings by three Iranian artists. This is a colouful and striking exhibition with a nice full colour guide and explanatory notes. On the ground floor near the small cafe and reception, are exhibitions of etchings, jewellery, paintings and crafts. I particularly liked Danielle Spelman's ceramics which are colouful and appealingly tactile.
As I said, over the past few years I've really been attracted to the medium of coloured pencil, even if I haven't yet managed to produce anything I'm pleased with. A few years ago I executed a mixed media piece in which coloured pencil played a prominent part, I wasn't too displeased with it until it was rejected from an open exhibition I entered, then I couldn't stand the sight of it!
Something about the photograph I based it on still niggles at me however, and I've begun another piece based on this. I began by laying down large areas of loose flat colour with Inktense pencils, which I freed and fixed with a layer of water. When this had dried, I began working in coloured pencil on top using Derwent Signature (now sadly discontinued) and Caran d' Ache Supracolour and my single Luminance pencil (Bleu De Phtalocyanine) - a free gift with with a magazine from earlier this year. I'd love a set of these pencils, but they're very expensive!
Anyway, here is the piece I made a couple of years ago based on my autumnal photograph. 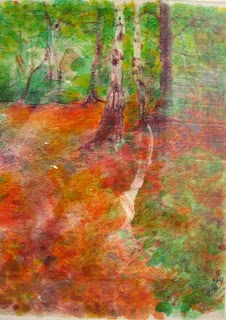 And here is an early stage of my current work in progress. 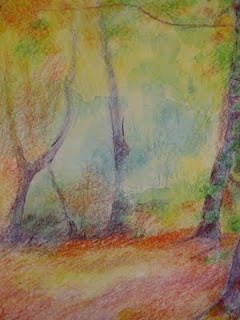 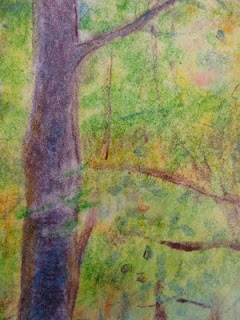 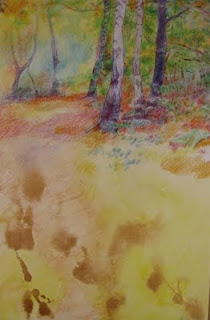