I'm trying out a new way of sizing up my drawings from my photographs. I usually draw freehand, I don't trace or square up or anything (actually I never could square up, one I’m hopeless at anything mathematical and two I don't like to see pictures in a cage). But I really wanted a particular slice of this image, a particular proportional composition, and I was irritated that I might not be able to get this by freehand alone.

So I traced my photograph (which I had printed on my trusty HP Deskjet printer on HP Photo Plus paper) then cut this down to the slice of the image which came closest to the composition I had in mind. I then scribbled on the back of my tracing in 2B pencil, flipped it over again and re-drew my original tracing on an A3 sketchbook.

I played around with shading and composition on this skeleton tracing then, and took this sketch to the scanner.

I had to scan the image in two parts as I only have an A4 scanner (hence the lines across the middle of the scan image).

In Photoshop I opened up the 2 scans (top and bottom of image), making sure that they are both showing at the same % size. Then I dragged the bottom part of my sketch onto the top part, altering the transparency of the active later so that I could see the bottom layer through the top. This made it easier for me to align the two scans so they fit together as smoothly as possible. I had to rotate the top layer a little as well as dragging it as each page had scanned at a slightly different angle.

I then flattened my double layer image into one layer and saved the image of my sketch.

I then increased the length of my image to the required size in Photoshop (via Image > Image Size). Changing the length automatically resizes the width in proportion and hey presto! No need for any squaring up. 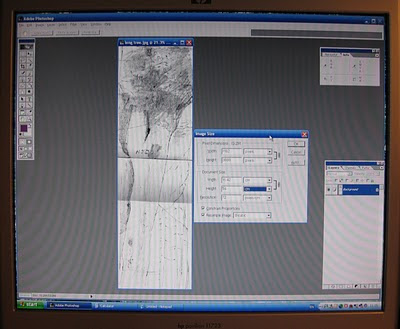 I printed the image in two halves (because I've only got an A4 printer then reverted to technological ludditism once more by sellotaping the two paper printed halves of my image together. I traced the new sized image again and transferred it onto my paper.

It sounds long winded but it actually took only a few minutes, and altering proportion to play around with the size of a compostion is pretty simple once the image is scanned into Photoshop. 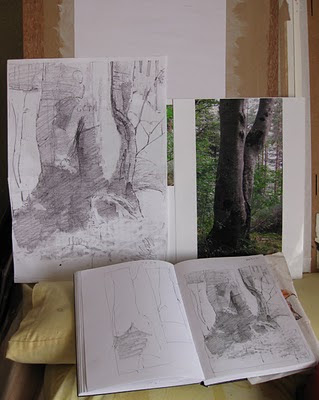 I came up with a couple of versions of my image, neither was exactly perfection though. The drawback with this process of sizing up from a sketch is that I lose the subtleties of human error that occur when drawing freehand. Beautiful things are often flawed in some way, it’s the flaw which sparks that little bit of magic and makes the thing unique.

Nevertheless I’ve started a new drawing. Something I can get involved with over the next few weeks I hope. And at the back of mind something is simmering away…another drawing based on this same image. But I think I’ll be making that drawing freehand. 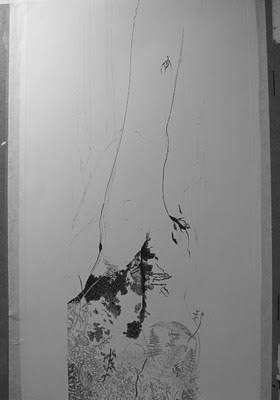 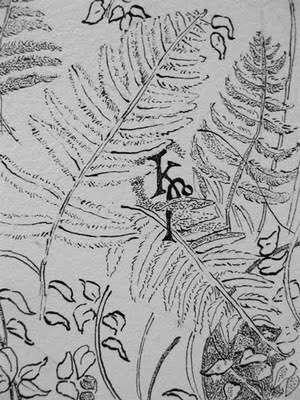 It totally looks like you figured out how to make it work.

I wish I could draw with my hands, so I have to use words instead. :)

I love the flaws in things best!!

I agree Jannie, flaws make a thing unique. The Venus de Milo would be half the woman she is with both her arms! Best wishes.