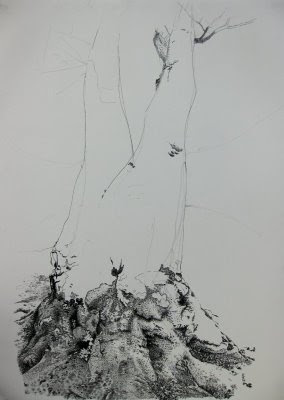 I began my graffiti tree picture full of enthusiasm, undaunted by the immense white page stretching out before me, or by the fact that a tiny pen nib (like the kind I use) has got an awful lot of ground to cover here. The base of the tree went fine, I got lost in mapping out the bumps of the trunk, the lumpy texture of the very base of the tree where trunk begins to turn into root, taking it's nourishment from the hidden place beneath our feet (the way art and literature are made, the brain taking its invisible nourishment from all manner of ordinary things, turning them into something magical, if you're lucky). I dwelt so long at the base of that tree, enjoying the chance to recreate the plush moss that clung to the bark, that I was in danger of forgetting about the top of the tree, the leaves and branches, where the light is captured and turned into energy.

So I made a start with the branches, and this is where I came unstuck. Sitting on the bed where I had been working I found that I could hardly reach the top of the drawing board, let alone see to draw those leaves in! It tried crouching over it, propping it up against a wall, turning the drawing upside down and on its side, finally I made a little progress by plonking a cushion on the drawing and actually sitting on it, crouched over, so I could draw the top of the picture. Much back ache, wrist ache, numb ankles (and unhappy accidental spillages or dirty ink water) later, I have a fragment of my picture underway. But I've a feeling this is going to be a much more painful process than I had envisaged. So much for ambition. It certainly does lead you down some tricky avenues.
Posted by Kay at Sunday, June 07, 2009