So I set myself a task for today to create a new linocut that uses line around the coloured areas, or at least that a dark outline would play a key part in the composition.

Maybe I selected the wrong subject for my composition last night, but anyway, it took me a long time to get started this morning, maybe it was the rain today and that it felt more like late October than flaming August, but I found a whole lot of things to faff about with this morning, including going through my box of maps and booklets from past travels... 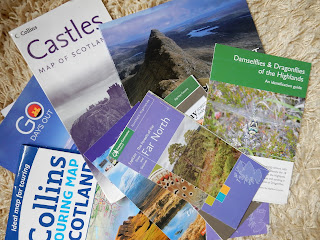 ...which left me feeling oddly bereft and wanting to escape my life.

Well I had to do the next best thing and escape into a picture.  A little time travel back 3 years to a holiday to Ullapool and a lovely pebble beach which we always seemed to stop at on our way back from our daily travels.  It was always just before dusk and the beach was always deserted.  At least in my memory it was. 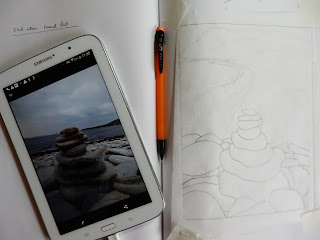 I had never seen a cairn before travelling to Scotland.  I remember seeing hundreds of them beside the road travelling up from Fort William to Ullapool on our first visit there in 2009.  We stopped in a parking area and joined the Japanese tourists marvelling at these strange otherworldly structures.

Since then I've got a little more used to finding them in far flung places.  We've built tiny ones of our own, but they were mere squibs compared to some of the fantastic Gothic heights others have achieved.  The cairn in the photograph was one of these 'found sculptures' long dismantled by the elements I now imagine.  And all the more poignant for that fact. 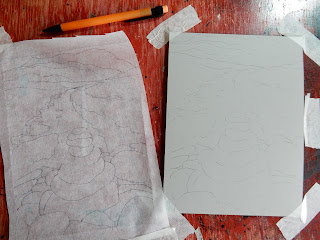 Anyway I eventually managed to quit my faffing about and sketch my composition then trace it ready to transfer to the grey lino block. 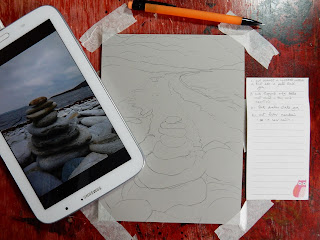 I usually keep my initial drawing very basic as I want to make my real drawing when carving the lino block.  Otherwise I feel that I am just copying my own drawing and this kills any spontaneity in the process.  I did draw a little on the block to clarify my design, and made a few notes as to how I wanted to start carving. 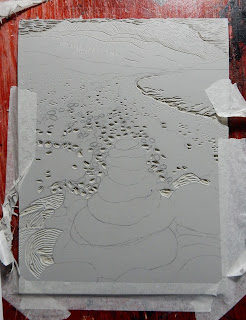 So I started carving, and eventually, pulled 10 initial prints from my block. 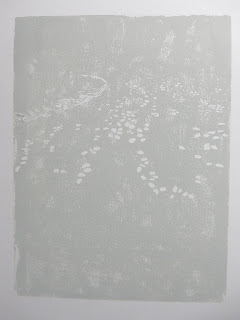 And now it begins to occur to me that making an outline a major part of this design might be more difficult that I had thought.
Posted by Kay at Tuesday, August 08, 2017