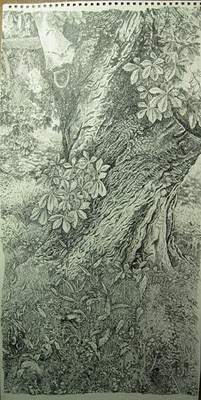 At last Frou Frou is showing some signs of life. Just a couple of times this evening and this morning, when I worked for about 20 minutes before catching the train to work, I lost myself in the drawing. Losing myself in a drawing is a good sign. 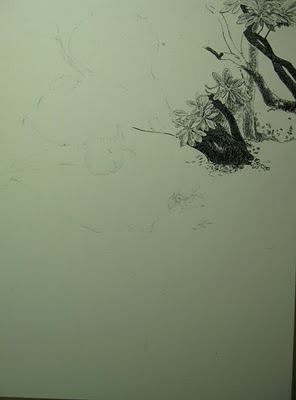 My new drawing is a deliberately simple affair. I want there to be lots of lush dark crosshatching involved, and the faintest shimmer of stippled light on still water. I want there to be more drama than detail, and more atmosphere than description. It will, in fact, be a more romantic (with a subscript r) affair than Frou Frou, which is hyper-lucid with a kind of waking dream (Richard Dadd) kind of look to it.

Tonight, by the way, I've been listening to a wonderful new Big Country compilation, passionate, melancholy, soulful and melodic in a big way.
Posted by Kay at Friday, September 16, 2011 No comments:

Drawing in - the nights 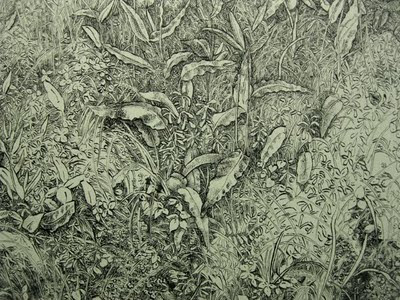 In a way I'm relieved that the nights are begining to draw in, even though they do so with remarkable speed. 7.30 sunset tonight, far too early.

And yet, this summer especially the garden has held me ransom. The hours I've spent seeing to our flowers, the tomato plants (they're heavy with tomatoes now, I don't know what to do with them. I don't even like tomatoes!), reading, sitting in the sunshine, snatching it when I can. And time, being so precious this year, as it was last year, nudges me further into obsession. This year more than any year I've felt almost driven to soak up as much of what passes for fresh air round here, earlier in the summer I sat out as long as I could until our solar lights came on, lighting up the garden path like a runway (Santa stop here!)

Tonight, a bumble bee, heavy with pollen or perhaps just tired out at the end of summer, has fallen asleep on the dropping sunflower near the veranda. I know how it feels. Sated on summer.

So now, the nights are drawing in, and I am freed to sit under the daylight lamp and work at my drawings. My neglected craft. 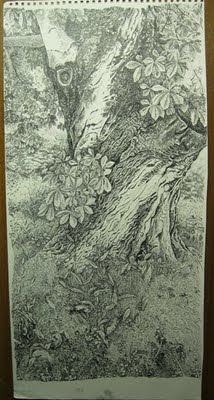 I think I began this drawing as much to keep chugging away at something as with any real intention at art. And it's been extremely slow progress, extremely frustrating. At least now I'm covering paper, but I don't know if I'm finding a pattern yet. I don't know if I will.

Last night I began a new drawing. A refreshingly simple subject, unemcumbered by detail. Or at least, keep the detail to a small area and surround it with painterly light and shade, pen and ink. Plus the pen glides more comfortably over the yellow Ingres paper than it does over the white watercolour paper. And at this moment I crave comfort. 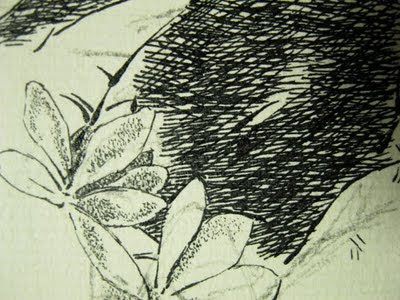 I got a chance to give a first listen to one of my Christmas presents this evening. The National's Sad Songs For Dirty Lovers. Gorgeous.
Posted by Kay at Friday, September 09, 2011 No comments:

I made a bit of a boob with my transparency labels. I bought laser ones instead of inkjet (if they do them, that is). Result:- Labels that never dry.

Which is annoying because they weren't exactly cheap. I don't really want to buy another box of film, so I'll probably take my file and film and see if I can get them printed out professionally. 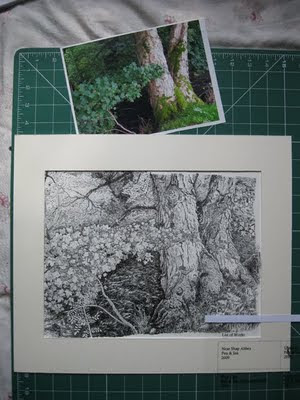 This setback threw me a bit, and I haven't really made as much progress today as I'd liked. I got some of the photographs together that I'd used as reference material and played around with ideas for displaying them with my drawings.

Including these little easels made from sticks and string. 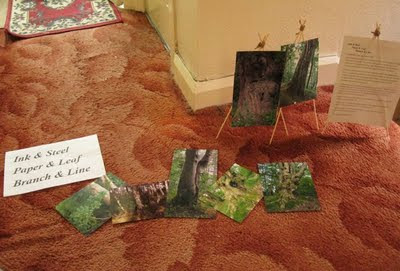 I liked them at first, but I'm not sure now. They're a bit Blair Witch maybe.

I've mounted most of the pieces I hope to exhibit at the library. Although it's not until the end of November, and it's only a very small exhibition (I'd have trouble filling more wall space - makes me realise how precious these pieces are for me, as they represent such a huge portion of my life) I won't rest until I have everything ready and safely tucked away in a folder. Hopefully I can just transport it to the library and assemble it in the display cases, nerves always makes me clumsy (or more clumsy than usual, which is really saying something), and I want it to be a swift operation. Hopefully with no mishaps!

It's hard finding the space to mount work though, I've spent most of today crouched on the floor upstairs, in the tiny space where I work or out on the landing, which is so dark I had to take the daylight lamp out there so I could see where mounting card ended and fingers began! 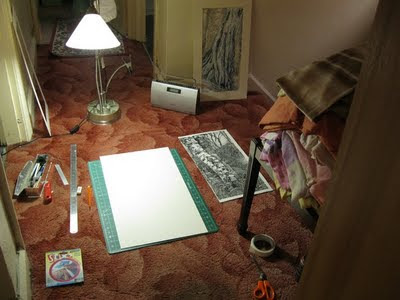 I've just a couple more pieces to mount now, then hopefully I'll start typesetting and printing out labels. I'm hoping to print these onto acetate and attach them to the mounts. Less to fiddle with when I come to putting them up. And hopefully it will look nice too.

I've spent huge portions of today listening to radio comedy, the Count Arthur cd I had for my birthday - absolutely hilarious, and a really nice trip through time courtesy of Bill Oddie, Comedy Controller, on Radio 4 Extra. Great to hear ITMA, I haven't heard much of this series, and I feel I'm locked out of a lot of it as it's the kind of thing you had to be there first time round to get, but there are some pretty sharp bits still. And it was interesting hearing Hattie Jacques in an early role as a cake loving schoolgirl. I've an interest in ITMA as the novel I was writing last year (and a few years previous) was set partly in 1947 and the world of radio comedy, as well as the music hall. One thing about this exhibition, one part of my strategy at least, is that I'm hoping that I can use it as a kind of creative catalyst. I have to get back into my creative work in some way, and ideally on the other side of this exhibition I would like to produce new visual work and also, maybe, see my way to completing my novel.