It's hard to believe that just 3 weeks ago I was sitting in the sunshine attempting to cool down with orange ice lollies and filling my glass with ice cubes before adding water that melted the ice cubes within minutes.  Today I sat in the garden wrapped in sweater, cardi and body warmer as I tried to draw the sunflowers I've managed to coax into some sort of life this year, despite snails, wasps and gale force wind.

It's been so windy!  One poor sunflower snapped in two, others have toppled in their pots so many times that they crushed and snapped their lovely heart shaped leaves.  For much of this week I've spent running about in search of a sheltered part of the garden, wedging the pots with bricks, other pots and whatever else I can find to stop them toppling!

And now, I attempt to draw the survivors.  I feel I owe it to them, if just to record the proof of the fact that some of them have actually survived and grin at me with their lovely yellow faces. 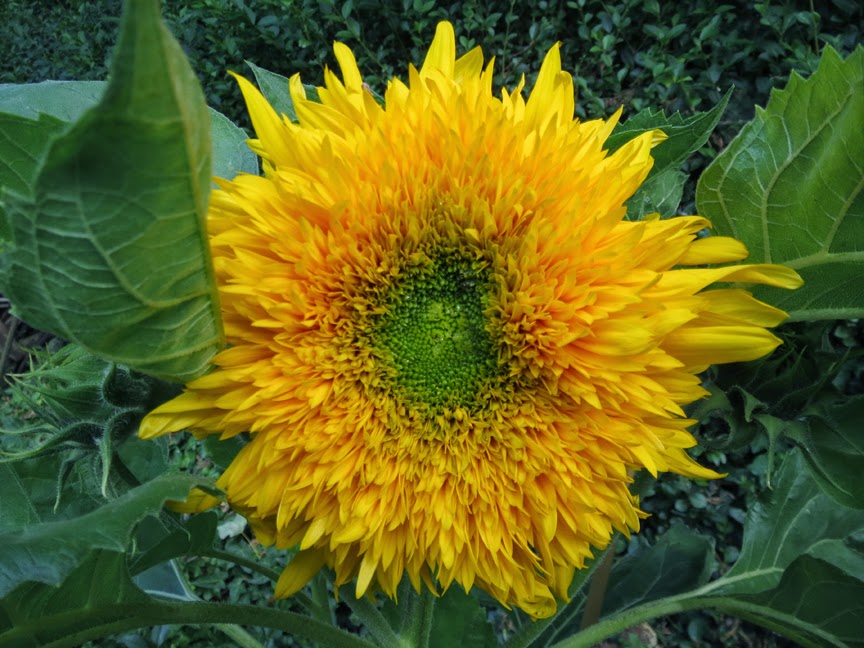 I love these Teddy Bear sunflowers, but this is the only bloom I've managed to coax into life so far. 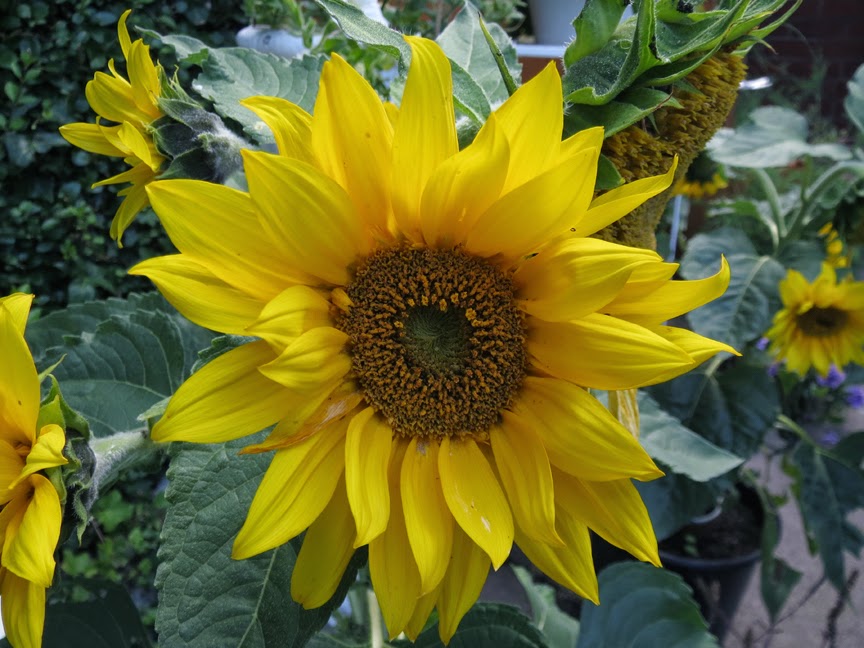 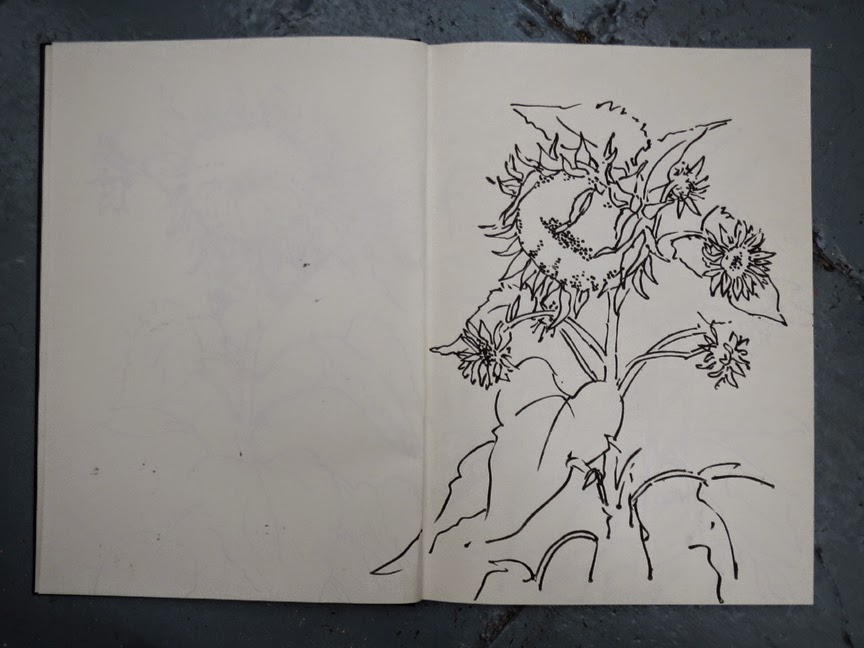 I wanted a break from working with fine dip pens so I've been trying out these marker pens.  This one is a chunky nib.  The sketch book is A3 size. I bought these Sharpie markers a few weeks ago and I think it's about time I tried them out.  This is on an A4 sketchbook.  The Sharpies are spirit based so they bleed through to the next page in this sketchbook.  I like the mirror image they cast through the paper.  The left hand image has bled through from the previous page, the right hand image is the new Sharpie drawing.  I think it might be nice to experiment with combining the two effects on the same page. 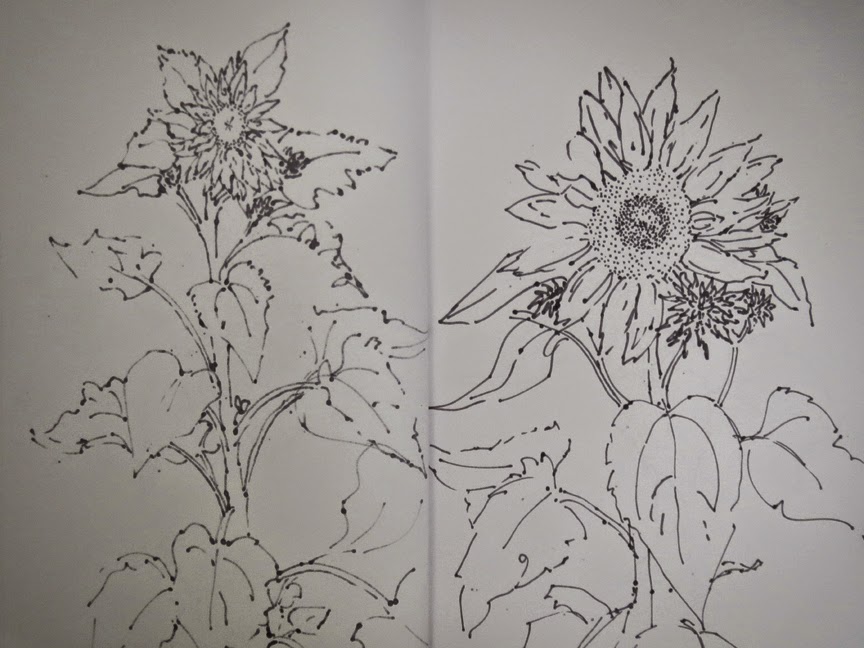 Another double page spread with Sharpie drawing and bleed through from previous page. 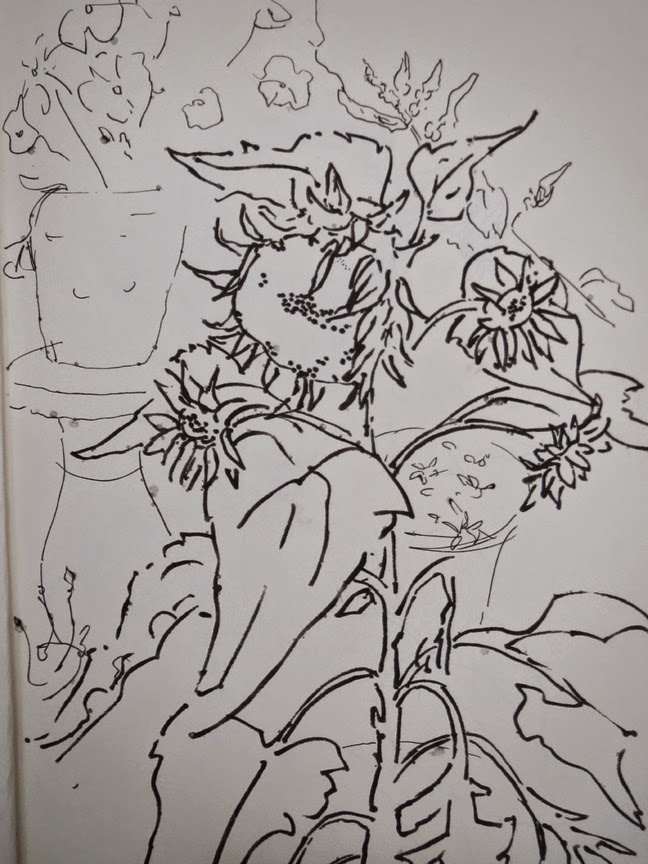 I used the chunky marker pen for the foreground sunflower and a finer marker to roughly sketch in the background.

I had some great news yesterday.  I have had a drawing accepted for this year's Open Exhibition of the Society of Graphic Fine Art.  It's a drawing I made in 2010, so it falls just within the 5 year span required by the Society for entries.  It is, I think, one of my best pieces, I exhibited it a few years ago at the RBSA and at an open exhibition in Worcester.  It's called PW PW 2001.
Posted by Kay at Tuesday, August 19, 2014 No comments:

Here is a small pen and ink drawing I've been working on, it's almost finished. It's more stylised than my usual work, and I gave the flower a coat of iridescent ink before drawing on top of it with dip pen and ink. 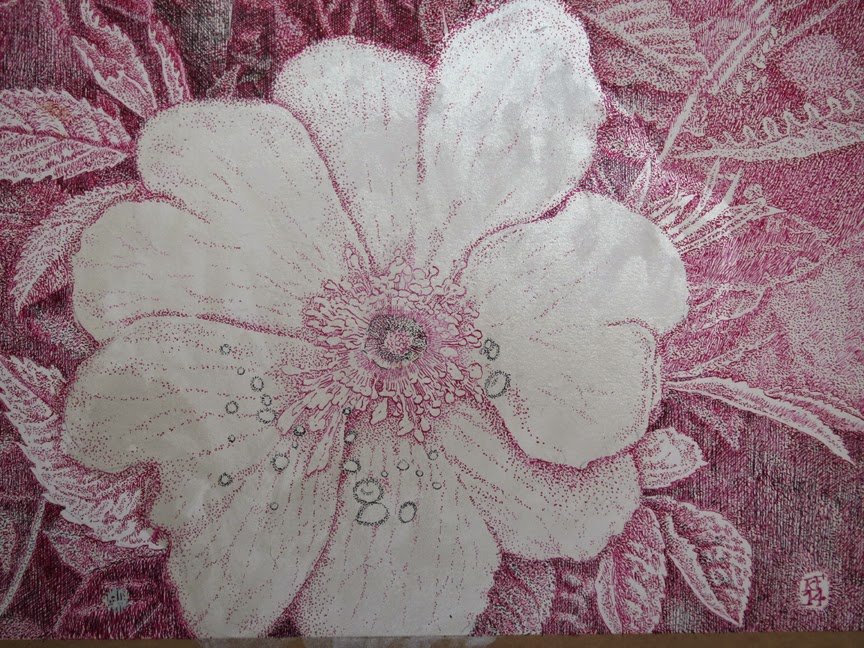 And here is a new seed I planted yesterday.  It's a rose bejeweled with rain/teardrops. 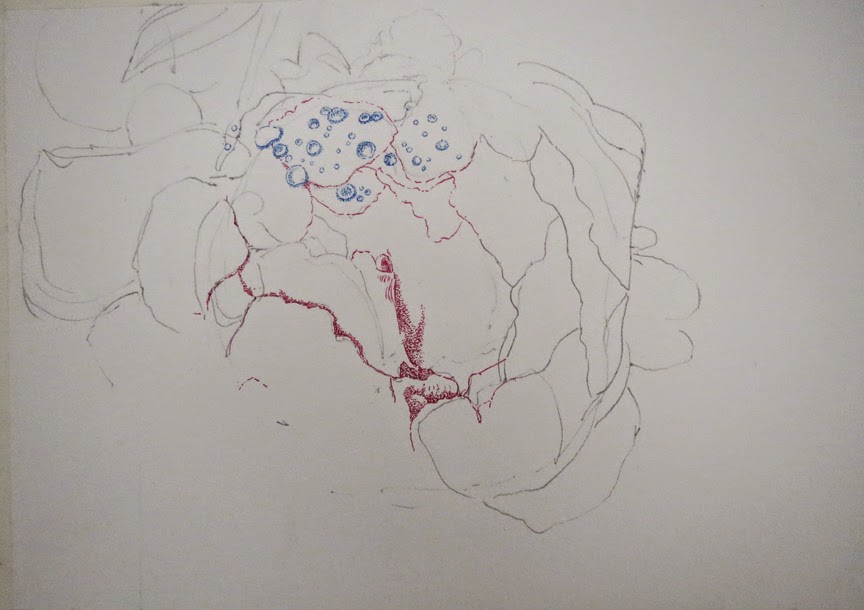 I regained some of my time 4 weeks ago when I was made redundant from one of my 2 part-time jobs.  I am still trying to get on my feet at the moment, but I dived into my new treasure box of time by signing up for and begining various courses and projects.  I've signed up for an on-line IT course with Vision2Learn and a Photoshop course with Wolverhampton College.  I  had my eye on a couple of on-line art courses but couldn't afford them, so I invested a little money in purchasing a course in book form.  I think I need to free up the way I approach my drawing, developing the imaginative side in a more obvious way.

I made a start on it last week. 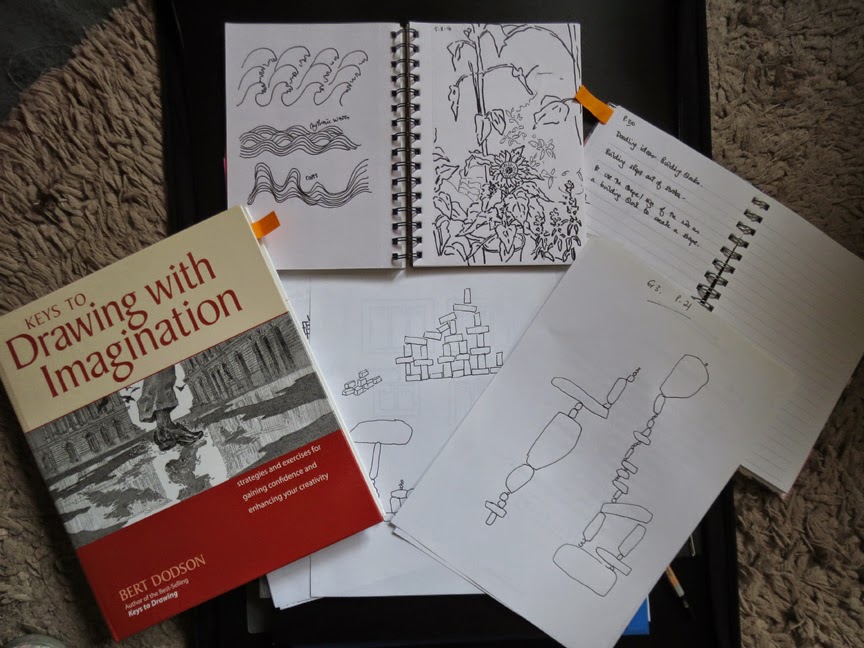 I'm hoping to use some of the concepts I encounter in this book in my serious artwork.  Time will tell...

One other project I've been dwelling on and working towards this year is an exhibition, which I am hoping to mount of my work later this year.  Hopefully around December time.  As I have focused on flower drawings mostly though 2014 this will be the subject of the exhibition, which I hope to hold at Wolverhampton Central Library.
Posted by Kay at Wednesday, August 13, 2014 No comments: