Bringing the cairn forward to finish

So I managed to fulfil yesterday's plan and chip out the contents of the foreground pebbles, as well as knocking a few holes and swirls into the brown of the seaweed.  I then mixed a rusty red colour and rolled this in the middle area of the linoplate.  I made a rough mask by tearing some copy paper and placing it over the shingle and the sea to protect it when I pulled the print.

As usual, I placed the plate in my home made cardboard registration device and protected the outer area of the print paper by placing a cardboard frame around the linoplate while rolling out the ink.

For added protection (because I am quite messy and accident prone - more of which later) I also put a paper frame around the inked up plate before laying the paper onto the plate prior to rubbing it with a spoon.  I use a stainless steel dessert spoon.  I tried a wooden spoon but didn't like the feel of it.  I usually rub once all over with the dessert soon, then once again pressing hard with my fist, then once again, more gently, with the spoon. 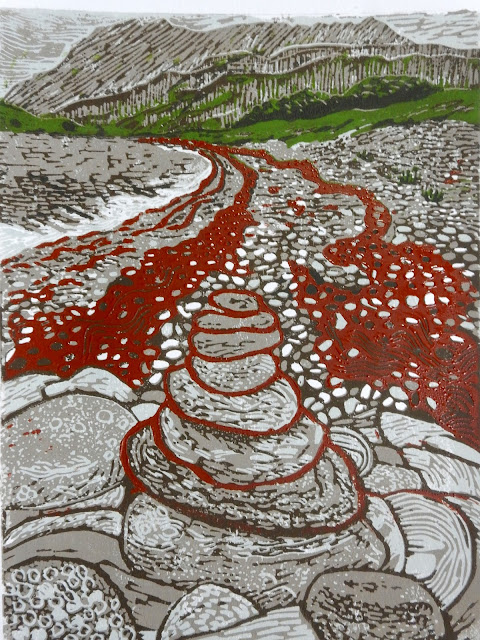 I left this to dry and dealt with a few other tasks for the day, like painting the fence so that one of our dormant sunflowers can at least bloom a sun shadow onto it... 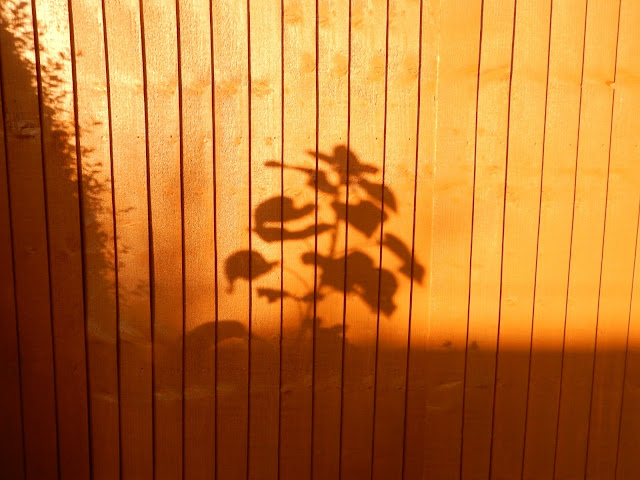 By which time our resident fat pigeon had feasted on a handful of birdseed, the gnats were swirling in the early evening sunshine, and the ink had dried on my print.

For the final application of paint I decided that I didn't want to cut any more of the plate, as it was already quite flimsy, the hessian was showing through in places (too heavy handed, that's my problem).  Instead I made a mask from copier paper and laid this over the area of the plate I didn't want to print.  I made a couple of these as by the time I had printed 5 of my 10 prints the paper was quite soggy with paint.  I added some crimson to the black and finished off my print. 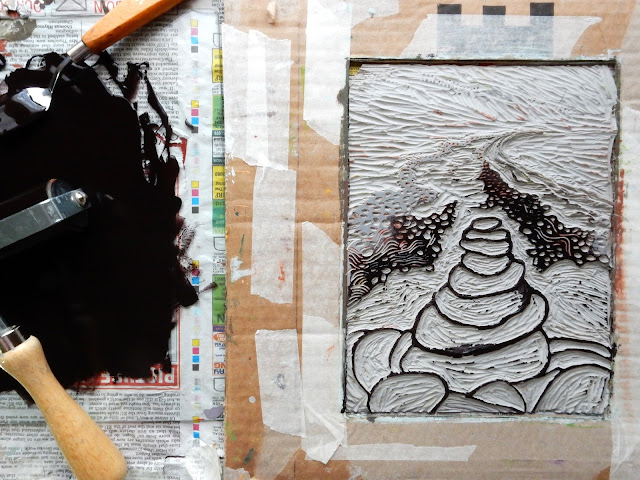 I'm quite pleased with the results, though I think that perhaps the seaweed area could be subtler.  Still, I had only 2 disasters - 1.  I trod on one of the prints while it was drying on the floor (a bit of spoon pressing and you can barely see the impression made by the ridged sole of my slipper) and 2.  (more annoying) as I was taking a photograph to post here I dropped the camera.  Bouncing off the print it left 2 dimples in the white area around the image.  Arrgghhh!

Years ago someone suggested that I have Dyspraxia, as I have always been clumsy.  As a child I was forever tripping over.  I was terrible at anything that required co-ordination, especially hand and ball or one leg before the other.

But to tell the truth, it might be that I am really just a thoroughly clumsy so and so! 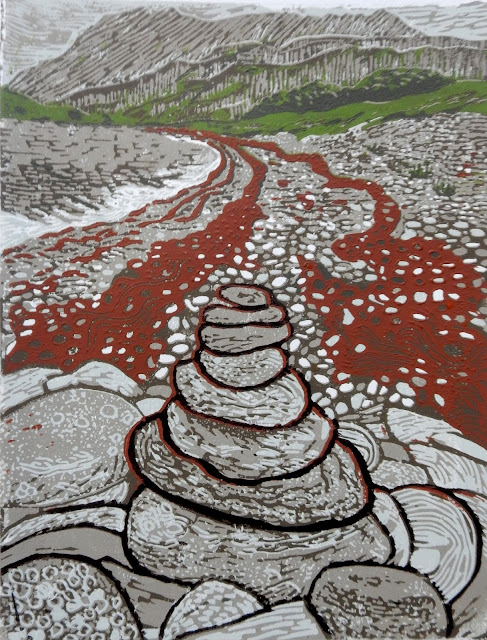 Quote of the day

'Words are more real when they are in books.'
John Lewis-Stempel
The Running Hare - The Secret Life of Farmland