As long as the day is short

It has seemed as if there were just not enough hours in today.  Half past eight in the evening and it's dark already, the curtains closed, the light in the cupboard where I sit with my computer spotlighting the keyboard.  It feels more like late October than mid August.

Outside the wind is dashing the sunflowers (which still have not opened, only one, a red velvet bloom). 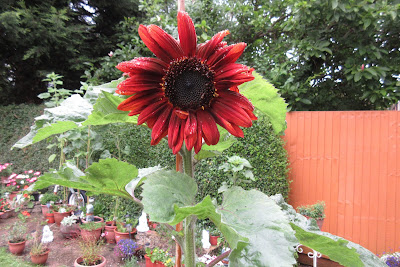 I had to make a split for its neighbour this evening as it had broken three quarters of the way up its 10 foot or so height.  We have squirrels in the garden, and I fear they may be the culprits.

Last year the sunflowers, which I have grown from seed annually for about the last 8 years, bloomed late, in early September, when I was on holiday.  I came home to a row of headless corpses.  Mum had watched from the kitchen window as the squirrel swung from the stem of each flower until it detached the bloom and ran away with its prize, presumably to gobble it up in the obscurity of next door's gargantuan fir tree.

Three years ago I spent much of the summer drawing the sunflowers which grew big and strong.  In those days, as I remember, the squirrels were nowhere to be seen. 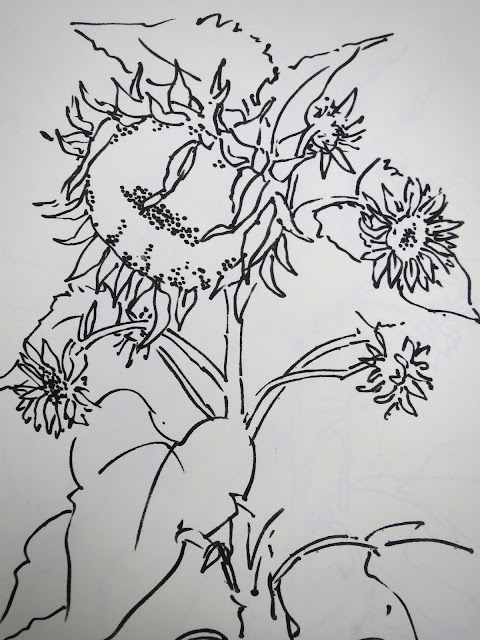 Today's progress began with finishing cutting the lino plate with more detail in the foreground pebbles and the retreating seaweed and to lighten the distant hills, to attempt to give the impression of distance between the cairn in the foreground and the further distance of the pebble beach. 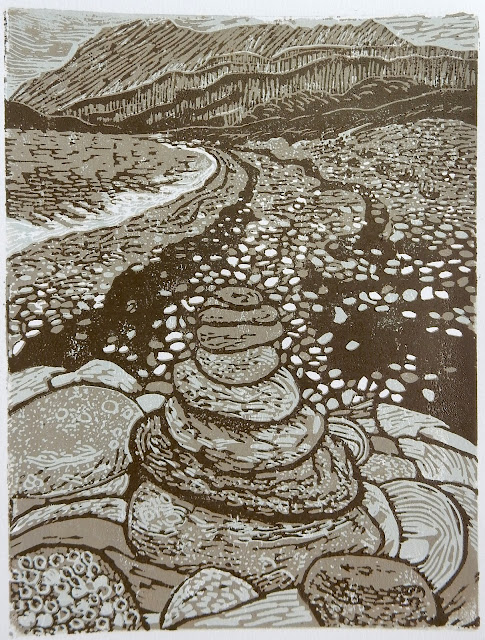 I chose to print this in a dark brown, in my attempt to fulfil the brief I set myself last week of creating a composition which is enclosed in darker lines.  Although to be honest, the design is running away with me somewhat and I'm in danger of not fulfilling my own brief. 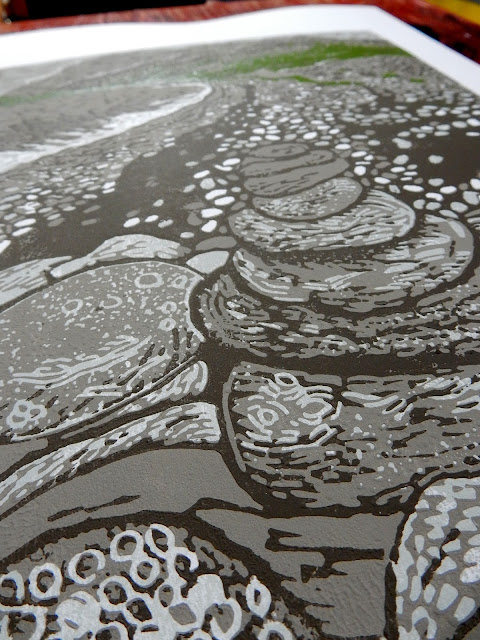 Next I turned my attention to the far distance.  I chipped away at the hills as I did not want to alter what I had printed there, and chipped a little detail into the green areas in front of the mountains.  I printed a muted light green which I mixed from a variety of colours, including some magenta, to knock the greeness off the green.  I didn't want it to scream out from the distance of my print. 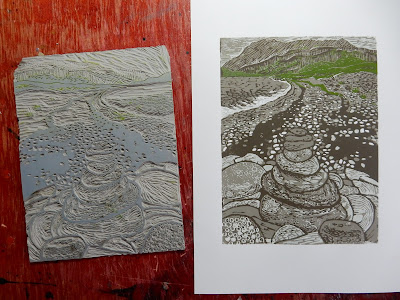 Finally for today I chipped more of the green areas and wiped all of the top area of the beach out, except for the little tufts of green seaweed, then printed again a darker green to add foliage to the distance.  I used a piece of torn paper to mask the top part of the sea, as I didn't want any green in that area. 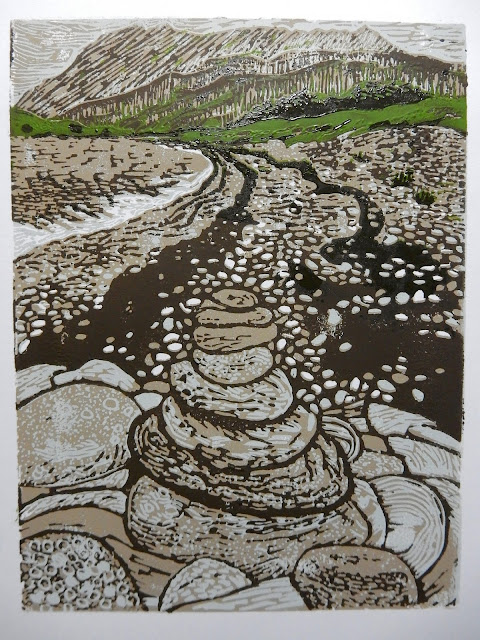 The task for tomorrow is to cut out all the pattern lines in the pebbles and to clean away everything surrounding the streaks of seaweed in the distance.  I'll cut a few pebble and swirly seaweed shapes into the large darker areas, then I plan to print a rusty red/brown over everything that's left.  Then I plan to cut away everything leaving just the bare bones of the cairn and surrounding pebbles in the foreground.  I will print this black, or black with a hint of something or other, to bring the cairn out of the picture plane.